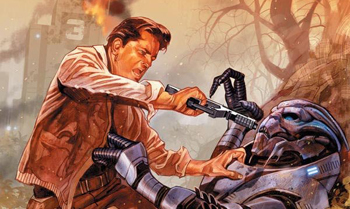 What part did the Illusive Man play in getting humanity into the stars? One thing is for sure, he definitely threatened a Turian.

A new comic book series from Dark Horse will shed some light on the enigmatic, chain-smoking head of the Cerberus organization, the Illusive Man. What’s more, it’s got the official BioWare stamp of approval, making everything in its pages canonical

While they seem pretty comfortable with it in the games, in the Mass Effect universe, humans have been exploring the stars for less than 40 years, and the new series – called Evolution – shows how the Illusive Man, who presumably was called something else at that point, helped in getting Humanity out into space. From the art for the first issue – as seen above – it looks like the Illusive Man happened upon one of the first Turians to visit earth. Of course, it could be a specific Turian who’s wronged him in some way. Honestly, it’s a little hard to tell.

BioWare’s Mac Walters, who was the lead writer on Mass Effect 2, is teaming up with comic book writer John Jackson Miller to write Evolution. Miller’s previous work includes the Knights of the Old Republic comic book, which is set in the same world as the games, but a few years before the events of the first game.

The first issue of Mass Effect: Evolution goes on sale on January 19th, with two variant covers for the true collectors out there.

Probing the Problems of Puzzles