Diablo and Torchlight co-creator Max Schaefer wants to keep working on the upcoming free-to-play MMO Torchlight Frontiers for as long as people want to keep playing it. Speaking at a hands-on preview for the console port for Torchlight II, the founder and CEO of Echtra Games said the studio’s whole goal is to make and continue to develop Frontiers, and that his team already has enough ideas for five years of content.

“The opportunity to turn Torchlight into an MMO is something that a lot of us have wanted to do since Torchlight [released in 2009],” he said. “We can keep building and taking it in directions that we had never thought of that the players want it to go. It’s something I’ve really wanted to do in my career, and finally we’re doing it.”

Torchlight Frontiers will already be bigger than Torchlight II, with 60-80 hours of linear content. Players will explore the titular Frontiers, biomes with unique themes like the Goblin Forest or Hyvid, which is infested with insect monsters. There will be plenty of distinct areas within each one including cemeteries, battlefields, fishing villages, and underground caves. Players will want to have specific gear for each area, like armor providing plenty of poison resistance, but the zones don’t follow a sequential leveling system. 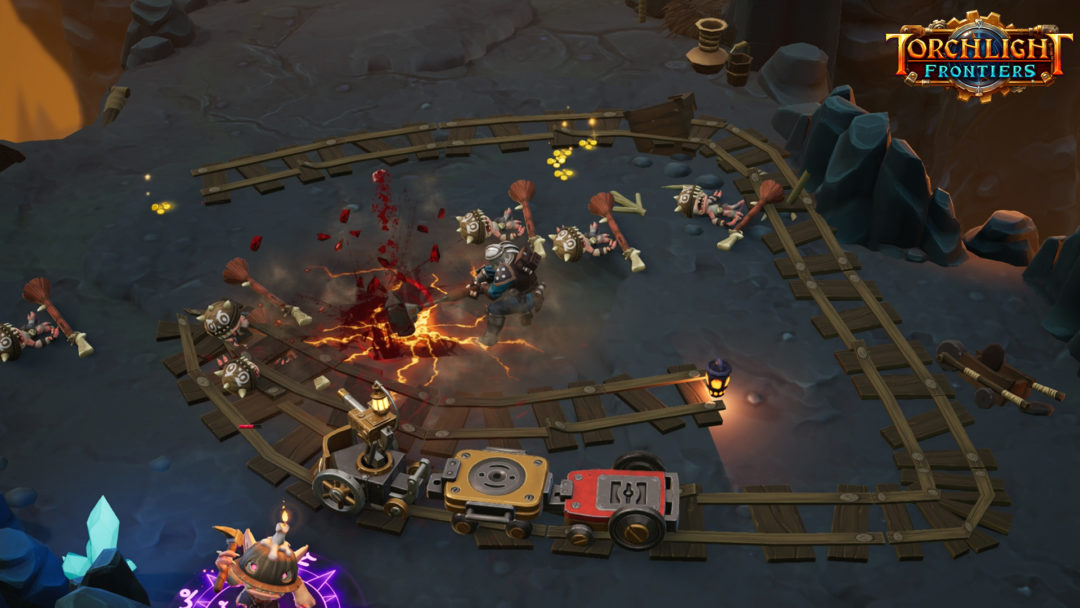 “That way when we introduce new areas, we don’t have to decide, ‘Is this a newbie area or is this an endgame area?’ It’s just a new area,” Schaefer said. “Any player who’s been playing the game can go into a new area and have a new fresh adventure starting right there.”

Schaefer said his team has recruited thousands of alpha testers who have been providing input on the game’s system, pacing, and balance. Their advice has had significant impacts, causing Echtra to roll back a new skill progression and leveling system in favor of using one that will be more familiar to Torchlight players.

“We’re in the office all day, heads down, making the game,” Schaefer said. “You kind of lose touch with reality in a way. We really depend on the players who are playing the game all day. We hear their input, we check it out, and we fix it.”

Torchlight Frontiers will have four classes that Schaefer said haven’t been seen before in Torchlight or any other RPG.

“We have a Railmaster class that has a literal train that follows you around with tracks,” he said. “It’s kind of absurd when you first see it. We made a fully robotic character class, the Forged. It’s got maybe more personality than the humanoid ones.” 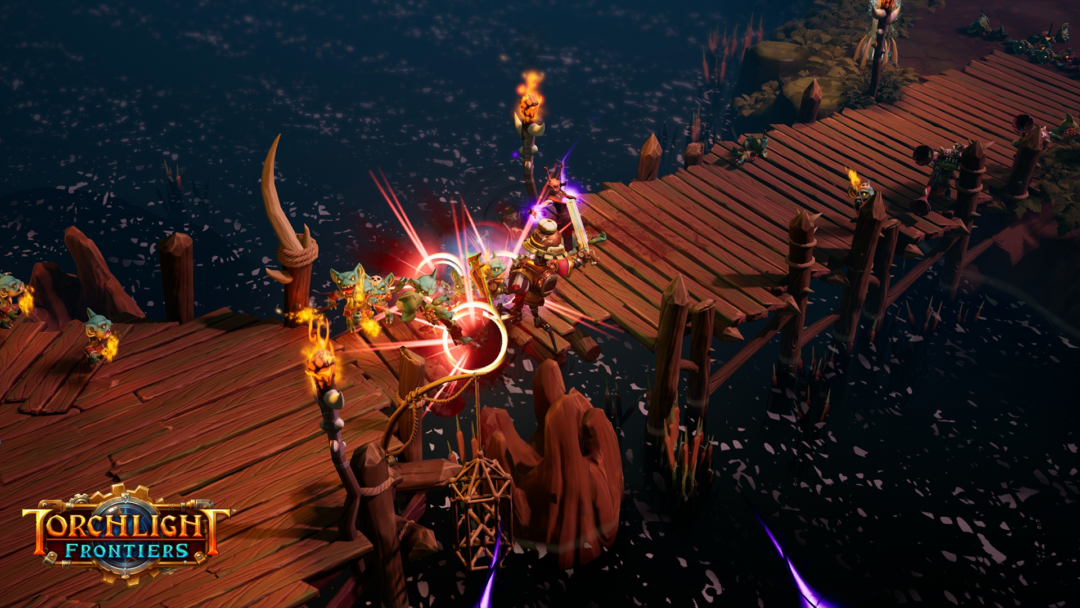 No matter what you choose, you’ll be accompanied on your adventure by a pet that will fight for you, have their own gear, and can carry extra loot back to town to sell. But Frontiers expands on the Torchlight II mechanic by letting players find and collect pets and mix and match their abilities. For instance, if you find a fire-breathing dragon but like the look of your dog, you can make a fire-breathing pup.

Players will start with five character slots, though they’ll be able to buy more through microtransactions. Gear and pets can be shared across your account through player housing called forts. Players will also be able to pay to hold more items in their stash and to buy access to maps with slightly better loot, which they can then share with any friends they’re playing with. But you’ll never be able to pay directly for items or experience points.

“Most of the good stuff is in the free track,” Schaefer said. “We want to be very gentle with monetization. We don’t want this to be a pay-to-win game. We don’t want you to feel like you’re at a point where you can only progress if you pay. That’s not how you get a good long-term dedicated audience.”

Schaefer wants to maintain the audience that’s grown as attached to Torchlight’s world as he is.

“It’s a rich, deep fantasy world, but it doesn’t take itself too seriously,” he said. “You have slightly goofy things happening. It also doesn’t have particularly deep or specific lore, so we can kind of make things up as we go. There’s just so many gaps we can fill in based on what’s good for the game and what the players want.” 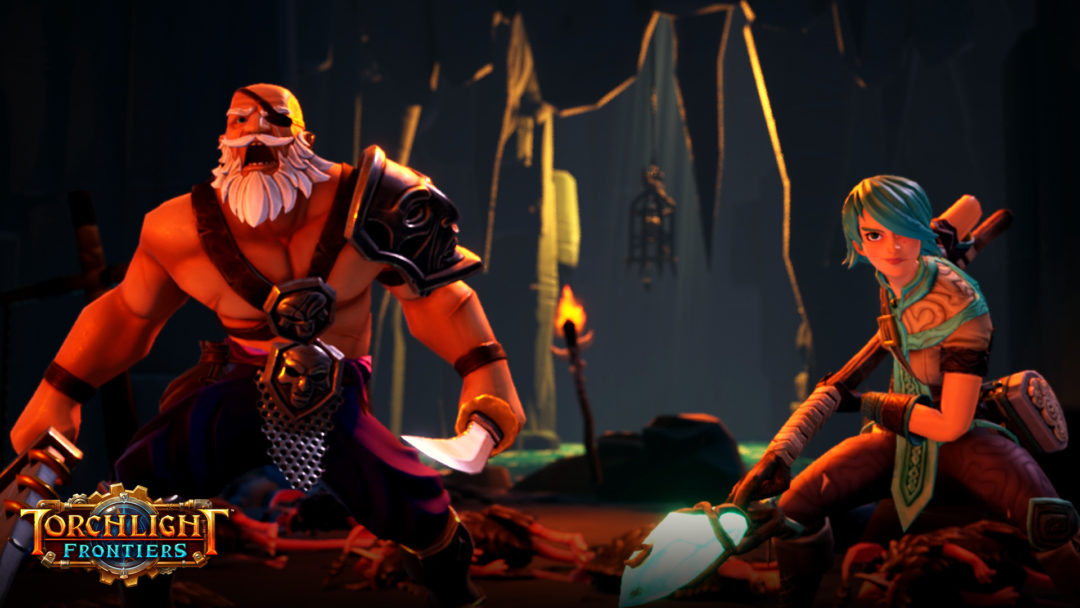 Another aim is to always keep the game approachable for new players, including younger ones.

“You are killing monsters, but it isn’t graphic, it isn’t intense, it isn’t violent,” he said. “We’ve always tried to make the controls very intuitive. If you’ve ever played any kind of ARPG, you can just step up and be very comfortable right away.”

With two frontiers complete and another in the works, Schaefer said his team is now experimenting with adding competitive elements to the game like racing to see who can kill a boss the fastest. They eventually plan to develop a PvP system.

“We’re throwing things against the wall right now,” he said.

Torchlight Frontiers will release in 2019 for PC, PlayStation 4 and Xbox One.

Three Single Player Games to Watch Out for in March 2021

Five Single Player Games to Watch Out for in February 2021