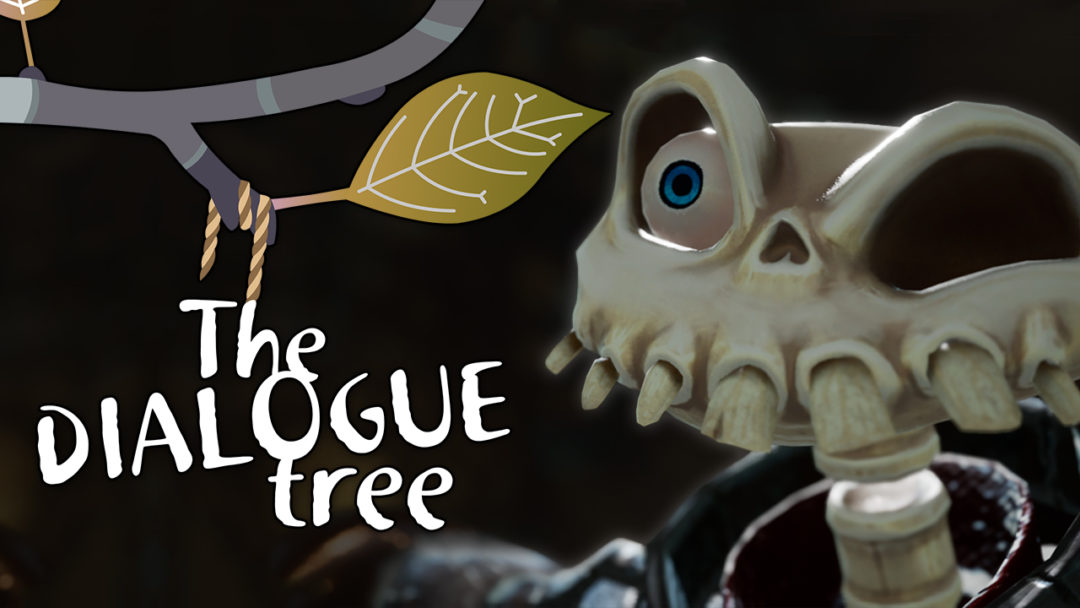 The Dialogue Tree is a new column at The Escapist by Patrick Lee in which he talks to game developers large and small about their works in progress. He’s starting things off by talking with Other Ocean Interactive about MediEvil.

When Sir Daniel Fortesque comes back from the grave in MediEvil, he comes back changed. The would-be hero of Gallowmere wakes up missing an eye and a jaw, but in their place he finds he has the courage and conviction he only pretended to have in life. The evil sorcerer Zarok’s curse resurrects Sir Dan into a world that desperately needs him. Using a dark magic called science, Other Ocean Interactive’s Mike Mika and Jeff Nachbauer are now doing the same.

“We don’t want to lose any of the charm of the original game, but at the same time we have to make sure that it feels right for modern players,” said Mika, Chief Creative Officer on Sony’s MediEvil remake. “We want to be as close to the memory of that game as possible without feeling like a bad cover band.”

“We started by looking at the first game, and reacquainting ourselves with it, and realizing just how much charm was there,” added Nachbauer, Executive Producer on the project. “We decided at that point to try to recreate the magic that is in the original title. So we entered with the ethos, ‘If it ain’t broke, don’t fix it.'”

The brain child of director Chris Sorrell and designer Jason Wilson, 1998’s original MediEvil was a landmark title of the early 3D era. Sir Dan’s quest to save Gallowmere was designed and built by a team almost completely unfamiliar with 3D game development, and it was one of the first games to use the now-standard but then-novel twin analogue sticks of Sony’s DualShock controller. Despite the technical hurdles, MediEvil became a hit, selling around 800,000 copies in its first year and scoring a sequel in 2000.

Back in this primordial early polygonal era, developers were still figuring out what was feasible, or even possible, in 3D. Rather than venture into this uncharted territory cautiously, Sorrell and Wilson’s original team went screaming into the new generation, looking to find its boundaries by crashing into them at full speed. The sheer amount of stuff in MediEvil puts many modern titles to shame. The game’s environments whip from graveyards to pumpkin patches to pirate ships, making asset sharing almost impossible, and there are over 50 completely unique enemy types.

Just trying to keep up with the original was one of the remake’s biggest challenges.

“When we were initially looking at this game, we assumed it would be like other games of the time,” said Mika. “We assumed that there was going to be a lot of re-use of assets, because why would anybody spend that much time, and that much effort, on something you look at once?”

“(For) some of those enemies in the original game, there’s only four of them,” continued Nachbauer. “They did all this work, they created this new enemy, with new art and everything, and use it for these four moments. And they’re not even major. They’re not mini-bosses or anything. They’re just these four characters that run out at you.”

In an attempt to be as faithful to the original title as possible, every single one of MediEvil‘s numerous zones and enemies will survive the transition to the new title. In fact, some will arrive more fully formed than when they left. Other Ocean has access to the original game’s source code, and buried inside it are some enemy behaviors that had to be pushed out to get the game shipped on time. The team is using this hidden knowledge to restore previously barebones bosses like the Pumpkin King to their intended glory.

The gaggle of gargoyles whose lore dumps and smack talk Sir Dan must endure on his quest are also getting new behavior for the remake. Perhaps the game’s most enchanting characters after Dan himself, Other Ocean’s gargoyles practically leap off the wall and mug for the camera, where the classic gargoyles’ jaws merely waggled up and down like Terry Gilliam cartoons. It’s the remake’s biggest aesthetic divergence from the source material, but Nachbauer is confident it was the right choice.

“We did initial tests. We do have a version of the gargoyle with the mouth just hinging open randomly, and it just did not work,” he explained. “They’re such a key element of the world; to have them just wiggle their mouth would seem like a lost opportunity. I think it has to do with the juxtaposition of their sinister quality with their grandfatherly voice.”

That grandfatherly voice will be returning in the remake as well. Not just the same voice actor, but the exact same audio files. Veteran actor Harry Dickman’s droll performance as Gallowmere’s gargoyles could never be replaced, so the new team isn’t even bothering to try.

In fact, the voice recordings Sony did for the original title in 1998 were so good, and in such good condition, that Other Ocean is reusing the lot of them. The only people to set foot in a recording booth for the new game are Lani Minella, who plays the game’s new narrator, and original designer Jason Wilson, who is reprising his role as Sir Dan. Wilson’s original recordings couldn’t be used because, to simulate the echoing acoustics of Sir Dan’s empty skull, he read all his lines wearing a bucket on his head.

“We did try to record stuff with the bucket; however, it didn’t come out quite as we were hoping,” said Nachbauer. “So there’s a post-process done on it, which creates the same effect but allowed us to be a little bit cleaner.”

Wilson tried to recreate his original deliveries as closely as possible, and he filled the role out with a few extra grunts and line reads while he was at it. Other Ocean’s animation team has also given Sir Dan a wider range of expressions, granting the skeleton even more personality than before.

“We had a static Dan head like the original game did for a long while,” Nachbauer explained. “Then our animators got around to animating his face for different cutscenes and things like that, and once we did that Dan became 10 times more engaging and expressive. Pardon the pun, but he looked dead otherwise.”

Wilson isn’t the only original team member returning to do work on the remake. Composers Andrew Barnabas and Paul Arnold, aka Bob and Barn, are back on board revisiting their celebrated soundtrack. The pair spent a week in Prague overseeing orchestral re-recordings of their classic compositions, and they have taken this opportunity to finally complete some work they were never fully satisfied with.

“They actually composed some new pieces for this game as well,” said Mika. “In the PS1 version, there were some tracks they had to create that weren’t tailored to the design of the game — they created a series of tracks, and then they were kind of just selected (at random). Some of them they were never really happy with. So they went back in, and they remastered the music for us, recorded a whole bunch of new sections, and some new compositions too.”

The re-recordings were done with every major instrument group — horns, woodwinds, etc. — on its own track, so the remake’s music will dynamically swell and fade with the on-screen action, another one of its select few concessions to modernity.

The remake will pointedly not be making any concessions when it comes to difficulty, however. The action in MediEvil takes place across several self-contained levels accessed via a map screen. Each level has to be done in one shot — no checkpoints. If you die five minutes from the end of a 30-minute level, you’re doing the whole thing over again.

Other Ocean sanded down the edges a little bit — making those slippery early 3D jumps will be a little easier — but otherwise the team is committed to preserving that vintage late ’90s difficulty.

“We wrestled with that a lot, whether we would put in checkpoints and things like that,” said Nachbauer. “The thing is, the original game design is so dependent upon that difficulty, and that ramping up. If we wanted to recreate the experience of the original game, to move away from that would be very, very difficult to do. That being said, the game is difficult. I think we will probably get a little flak for that in one or two areas. But it’s so interesting to the design. It’s really hard to not recreate that without changing the game significantly.”

The team will only attempt to curb the game’s more frustrating elements. Nachbauer and Mika both single out the notorious Pools of the Ancient Dead level, with its narrow walkways stretched across miles of instant-death pitfalls, as a stress point that’s been toned down. The goal is to retain the proper challenge, but to make sure players never lose progress to dodgy camera positioning or awkward controls.

There may be no room in the new MediEvil for frustration, but a bit of jank has been permitted to sneak through. Comparing the original game’s source code to the finished product, Mika and Nachbauer discovered several bugs that ended up being crucial to the game’s feel. Sir Dan’s choppy, irregular sword swings were apparently supposed to be much more orderly, but a flaw in the code left the knight twitchier than intended. Dedicated to faithful recreation, the team remastered the bugs too.

“We actually added the code in exactly as it originally existed, and we were getting the intended result,” said Nachbauer. “And when we put our fixed code in there, it didn’t feel right. It didn’t feel like MediEvil for some reason. It was a very odd experience, of like, ‘Okay, we fixed this bug and now the game feels different.'”

Mika is insistent that the original game’s held-together-with-chewing-gum presentation is just a part of its handmade-like charm.

“I always call it raw,” he explained. “They were making it up as they went along, kind of. Every level has all these unique actions and interactions that were hard-coded into the game, whereas in modern games you usually come up with systems that will handle a lot of that. Most modern games try to run away from that concept, and this game ran directly into it. That’s what gives it its feel, though. Because everything feels really unique, and the interactions don’t feel like they’re part of a system; they feel really raw, and genuine, and visceral.”

“If God of War is a Stanley Kubrick film,” Mika concluded, “MediEvil is Sam Raimi.”