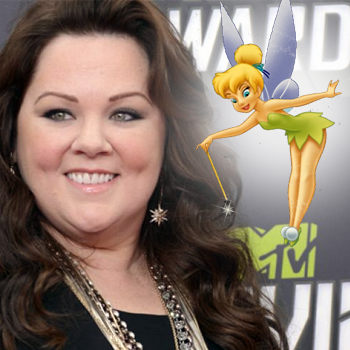 In case you hadn’t heard, movies based on characters today best remembered from classic Disney movies are big business now – even when Disney isn’t the one making them. Now, Twentieth Century Fox is getting in on the game with a new take on Peter Pan’s iconic fairy Tinkerbell, and comedy megastar Melissa McCarthy is reportedly signed for the titular lead role.

Night At The Museum helmer Shawn Levy will direct the film from a screenplay by Nicholas Stoller, who directed Neighbors and wrote Muppets Most Wanted this year. The film (which does not have an official title) is described as a “comedy adventure.”

McCarthy has been on a serious box-office hot streak since breaking out in Bridesmaids, with the hit sitcom Mike & Molly also to her credit. In addition to Tinkerbell and a fast-tracked sequel to the buddy-cop hit The Heat with co-star Sandra Bullock, she’s also heavily rumored as a prime contender for the all-female Ghostbusters reboot.