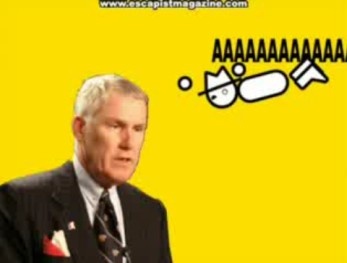 South Australia Attorney General Michael Atkinson has reaffirmed his stance against an R18+ videogame rating in the country, saying in a letter written to a constituent that parents cannot prevent their children from playing adult videogames in the home.

Atkinson is widely reviled among gamers in Australia and, to a lesser extent, around the world for his unyielding opposition to the creation of an R18+ game rating. Because Australian law requires unanimous consent from all Attorneys General before any changes to the rating system can be made, Atkinson is seen by many as single-handedly ensuring that Australia is the only developed nation in the world in which mature gamers cannot legally play mature games.

But Atkinson is entirely unapologetic; in fact, on several occasions he has not only reiterated his belief in his rightness but dismissed concerns from gamers outright, at one point calling them “R18+ nerds.” It’s a point he made again in recent correspondence with a voter who asked about game classifications, saying that it’s quite possible for adults to find games that will challenge them without having to resort to “depraved sex, gore and cruelty.”

“It is important that you do not confuse the classification rating of a game with the game’s sophistication, or the challenge or interest to the player,” he wrote. “It does not follow that a game is more interesting to an adult simply because it contains extreme violence, explicit sexual material or highly offensive language. Indeed, with all the effort and money that goes into game development, coupled with the effects and graphics now available, there is no need to introduce these extreme elements. I am baffled and worried about why proponents of R18+ games are putting up their hands and saying, ‘Give us more cruel sex and extreme violence!'”

Atkinson claims that since almost two-thirds of Australians in “gaming households” say classifications have no influence on their decision to buy a game, he “cannot fathom how State-enforced safeguards could exist to prevent R18+ games being bought by households with children” and, once they’re in the home, how they could possibly be kept away from youngsters. “If adult gamers are so keen to have R18+ games, I expect children would be just as keen,” he added.

Noting that he’ll be up for re-election early next year, Atkinson said he will continue to fight efforts to introduce an R18+ videogame rating. “I would welcome advocates of R18+ computer games testing public acceptance of my policy by standing a candidate against me in that general election,” he concluded. “I think you will find this issue has little traction with my constituents who are more concerned with real-life issues than home entertainment in imaginary worlds.”

The entire letter, which is actually quite long and offers a very detailed look at Atkinson’s perspective on the state of videogaming, is available here. (PDF format)