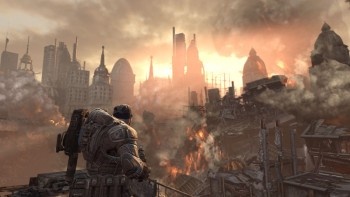 Thanks to Microsoft, and not to Epic Games Design Director Cliff Bleszinski, the world now knows, or is at least pretty sure, that Gears of War 3 is coming in April of next year.

CliffyB was scheduled to appear on Late Night With Jimmy Fallon last night to reveal a new game, widely expected to be Gears of War 3. At the last minute, the appearance was postponed to the following Monday; initial rumors suggested that Bleszinski was bumped for singing sensation Justin Bieber but he denied the story on Twitter, writing, “The truth of the matter is that we wanted to take a couple more days to polish what we’re showing.” Whatever the case, it looks like somebody at Xbox Live didn’t get the memo because in spite of the change in plans, an ad for the game appeared on the Xbox 360 dashboard last night.

“Gears of War 3 announced,” the ad incorrectly advised gamers. “The epic story concludes April 2011.” That part may be true and, specifics of the release date notwithstanding, it’s hardly an Earth-shattering surprise, but it’s still kind of a kick in Epic’s junk. CliffyB can tell us about the game and maybe show us a little bit of what’s in store, but at this point, unless he surprises us with something completely unexpected – a new Jazz Jackrabbit, maybe – it’s bound to be a bit of an anti-climax.

Rough break, Cliff. Keep this in mind the next time that Bieber kid gets in your face.

The End of Reality (Good Riddance!)