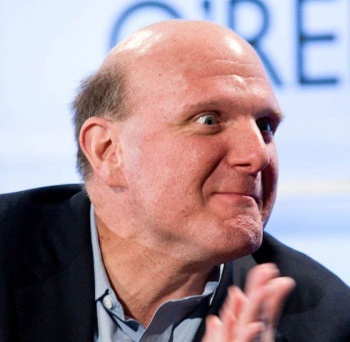 Don Mattrick has left Microsoft for Zynga. As the firm has no immediate replacement for Mattrick, CEO Steve Ballmer will now lead the Xbox division.

Undoubtedly the biggest news story to emerge this week was word that Xbox President Don Mattrick had decided to leave Microsoft in favor of taking over as CEO at casual games factory Zynga. It’s undeniably an industry-shaking event, but in all this hubbub few thought to ask who might be taking Mattrick’s old job. As it turns out, no one is taking that position just yet. Instead, Microsoft CEO Steve Ballmer will oversee the Xbox wing until such time as the company can find a suitable Mattrick analogue.

Ballmer, as many techies know, has a long history with Microsoft, and while he has no direct experience in leading the company’s games division, it shouldn’t be all that difficult compared to the stresses of managing one of the world’s largest tech companies. Of course, if it is, Ballmer has his own way of dealing with work stress. To wit, this incident (courtesy Wikipedia, for brevity’s sake):

In 2005, Mark Lucovsky alleged in a sworn statement to a Washington state court that Ballmer became enraged upon hearing that Lucovsky was about to leave Microsoft for Google, picked up his chair, and threw it across his office, and that, referring to Google CEO Eric Schmidt (who previously worked for competitors Sun and Novell), Ballmer vowed to “kill Google” in an expletive-laden tirade then resumed trying to persuade Lucovsky to stay at Microsoft. Ballmer has described Lucovsky’s account of the incident as a “gross exaggeration of what actually took place”.

Whether the chair-throwing claims are legitimate or not, that incident has become indelibly linked to Ballmer’s public persona over the past few years. We don’t actually think the man is going to start tossing chairs at people if the Xbox One doesn’t immediately break sales records, but it’s hilarious to imagine, so we’re going to cling to this idea that Ballmer is more or less Donkey Kong sans barrels.

How does Ballmer feel about his new role? That’s an easy question, as the man issued an official email on the topic:

Zynga announced today that Don Mattrick would be its new CEO, effective July 8. This is a great opportunity for Don, and I wish him success. Don’s directs will report to me and will continue to drive the day-to-day business as a team, particularly focused on shipping Xbox One this holiday.

Since joining IEB more than six years ago, Don and his team have accomplished much. Xbox Live members grew from 6 million to 48 million. Xbox 360 became the No. 1 selling console in North America the past two years. We introduced Kinect and have sold more than 24 million sensors. We released fantastic games, and, most importantly, we expanded Xbox to go beyond great gaming to deliver all the entertainment people want – sports, music, movies, live television and much more.

In the past month, the IEB team showed for the first time here on our Redmond campus, and again at E3, how we are going to continue to transform entertainment with Xbox One. I am incredibly proud of the work and vision culminating in Xbox One.

I’m particularly excited about how Xbox pushes forward our devices and services transformation by bringing together the best of Microsoft. The consoles are incredible all-in-one devices with built-in services that consumers love, including Bing, Xbox Live, Internet Explorer, SkyDrive and Skype. And, just as important, Xbox Games, Xbox Video, Xbox Music and SmartGlass light up Windows PCs, tablets and phones.

Thank you, Don, for setting us on a path to completely redefine the entertainment industry. The strong leadership team at IEB and their teams are well positioned to deliver the next-generation entertainment console, as well as transformative entertainment experiences, long into the future.

While nothing exists to indicate that Ballmer’s kind words are anything less than 100-percent truthful, we also have to suspect that this email was an attempt to calm Microsoft shareholders who may have grown understandably skittish in the wake of Mattrick’s departure. “Don was great, but we’re great too, and the Xbox division will do just fine,” the email seems to say.

Expect more on this situation just as soon as Microsoft finds a long-term replacement for Mattrick (or failing that, as soon as Ballmer kidnaps Pauline).

You’re at the Heart of A Machine For Pigs