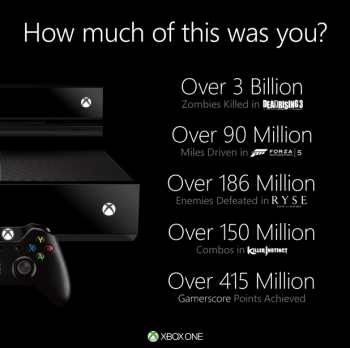 Microsoft’s humbled and gratified by the public’s response to its new console.

“We are humbled and gratified by the overwhelming response from our fans to the launch of Xbox One,” says Microsoft’s Yusuf Mehdi. “Eleven days in we are seeing record breaking sales and are selling every Xbox One we can make.” But what have those buyers been doing? Killing zombies and racing cars is the answer, and between the lot of you, you’ve chewed through 3 billion Dead Rising deadfellas so far.

Along the way, you’ve managed to rack up over 415 million Gamerscore points, race over 90 million miles, get over 150 million Killer Instinct combos, and so forth. Well done! But the one number Microsoft hasn’t revealed yet is an actual sales figure. We still don’t know how many consoles Microsoft moved, which may or may not mean that it hasn’t yet beaten the PS4’s 2.1 million.

That said, there aren’t many Xbox Ones left on the shelves. “Demand is far exceeding supply in the 13 countries we’ve launched and we are sold out at retailers around the world,” says Mehdi.

If you’re having trouble finding one, Major Nelson has some tips for you. Microsoft’s busy trying to get more consoles out to retailers; no way is it going to be left with a sack of coal come Christmas.

He Who Shall Not Be Named