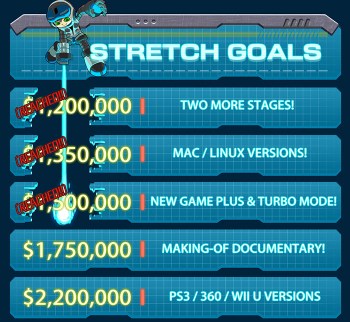 Console versions of Mighty No. 9 have very suddenly become a little bit closer to reality.

Mighty No. 9, Keiji Inafune’s “spiritual successor” to Mega Man, hit Kickstarter on August 31 and very quickly blew the doors off its goal, raising $900,000 in just four days. One stretch goal and then another fell shortly thereafter, and it seemed very much like the sky was the limit. But the one concern that a great many supporters had, according to the developers, was that as a PC release, the game wouldn’t properly capture the “feeling” of the classic Mega Man games. Console versions were offered as a stretch goal at $2.5 million but even with the mighty momentum, that’s an awfully big number.

It’s a little closer now, however, thanks to some stretch goal tweaking that gives the console plan a better chance of coming to fruition. “We’re happy to announce that, because of your feedback, we are officially pushing back the unannounced ‘???’ goals in order to move the making-of documentary $250K closer, and yes — the PS3/360/Wii U versions of the game $300K closer as well!” the team wrote in a Kickstarter update today.

Apparently there’s more to making this kind of thing happen than just swapping some numbers and/or features around. “The dollar amount for any one stretch goal isn’t designed to go only towards that one stretch goal, at least not in many cases — even after fees and rewards are taken out. Usually some percentage of funds goes toward the larger game as a whole, adding and polishing pieces that aren’t as headline-worthy or sexy as the stretch goals (hopefully!) are,” the update explains. “We’re happy that, in the end, we were able to make these adjustments without having to remove or reorder any goals we previously announced, as we can still be confident about the cost calculations we already had in place for them relative to each other.”

There’s still a long way to go to reach the PS3/360/Wii U stretch goal of $2.2 million but 300 large is a substantial cut and right now it appears well within reach: The Mighty No. 9 Kickstarter runs until October 1 and has already rung up well over $1.5 million.