Stories in games often suck, and they don’t need to.

There. Made my point. See you next week.

Oh. You want to see some sort of thought process behind this line of thinking? Sigh. Fine.

I’ve heard the argument that “games are about gameplay, not about story”. Pong didn’t have a story. Neither did Pac-Man, etc. That’s all fine and good. A game doesn’t have to tell a story to be good. I’m not suggesting that Lumines would have been a better game if developer Q Entertainment had added a plot about saving the world from space aliens by matching squares of colored blocks and hired Liam Neeson to play the part of the Haggard Scientist who Knows All The Answers But Nobody Will Listen. (That role should go to Jeff Goldblum anyway.) The game had flashy colors and music that stimulated the pleasure centers of the optic nerve. And that was enough. But I am suggesting that if a game is going to take the time to tell a story with flashy cinematics, then there’s no excuse for it to be stupid nonsense.

Let’s break it down:

For your average five-minute cutscene, you need the following:

1) Someone to write five minutes of dialog.

2) Voice actors to perform the scene.

3) An audio technician to capture the audio and get it into the game, as well as a director to guide the performance.

4) A motion-capture actor or actors to enact the scene.

5) The motion-capture technicians to grab that animation data and get it into the game, as well as a director to guide the performance.

6) A 3D artist to build the characters.

7) A musician to score the thing.

8) A few more artists to build the scenery, create the texture maps, set up the lighting, add the props, and set up various things like particle effects.

9) And finally, you’ll need someone to bring it all together, script it, and either capture it as video or put the scene into the game engine. 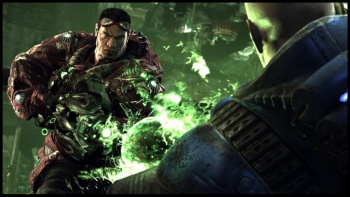 This process involves a lot of people and might represent hundreds of hours of labor. Step one – the writing – is the simplest and cheapest step. I’m not saying good writing is easy, but when it’s such a tiny part of your overall budget and so crucial to the success of the scene, there’s just no reason not to get it right. It’s like hiring a world-class chef and then having her make us a peanut butter and jelly sandwich with stale bread. Why are you wasting the time of both the artist and the audience?

We regularly see games where thousands or millions of dollars were spent bringing to life scenes rife with clichés, porous with plot holes, infused with awful dialog, and hampered by shameful pacing. I’ve managed to play a few of these dumb games in my lifetime. Far Cry. Fable 2. Unreal Tournment III. Champions Online. Resident Evil 4. Silent Hill: Origins. (I’m leaving out the notorious Metal Gear Series in order to avoid the common argument over whether Kojima is being self-indulgent or satirical.)

The usual objection from fans is, “Who cares? I loved the game anyway!” Fine, but did the lousy writing make the game better, or did the game succeed in spite of it? To put it another way: If the game had a story that made sense and characters we cared about, would it have somehow ruined the game? Did the writing have to suck?

I’m not asking that every game be a BioShock, The Longest Journey, Max Payne, KOTOR, Portal, or Silent Hill 2. There’s plenty of room for plotless action or abstract games. But I am saying that if a story is worth doing, it’s worth doing well. If it’s not worth doing well, then why are we wasting precious game budgets on it? If Devil May Cry 4 is so fantastically stupid (I’ve only seen the Unskippable version of it) and if nobody cares, then why bother? Why make cutscenes that are either ignored or loathed? Why not just give players more stuff to shoot and more places in which to shoot it?

Let me make clear that I’m railing against games that refuse to try, not against ones that try and fail. The Unskippable series is a catalog of agonizing scenes where developers squandered vast resources animating stories that weren’t worth telling in the first place.

I’ve spent more than my share of years making fun of terrible writing in prose and in comics. If we could just get game designers to give a bit more attention to such a fundamental feature then at last I would… uh. Be out of a job?

Question: When you think of painfully bad writing, what game earns your scorn?