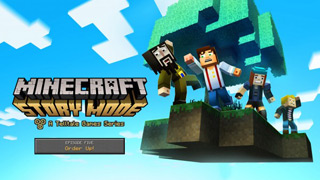 The newest episode of Minecraft: Story Mode will land on March 29.

Titled “Order Up,” the newest episode will bridge the gap between the Wither Storm story arc and three new so-called “post-season” episodes that are scheduled to appear later this year. The newly added episode will still be considered part of this season, which means you will need to own at least the first episode in order to play them.

Telltale will launch the newest episode simultaneously on PC, Mac, PS4, PS3, Xbox One, Xbox 360, and iOS and Android devices. You can check out the new images from Episode 5 in the gallery below.

The official description for the new episode reads as follows:

“On a tip from Ivor, Jesse and friends head to an abandoned temple holding mysterious treasures. Ambushed by former Ocelot Aiden and his crew, our heroes find themselves in an entirely new world: Sky City! As they explore, the Order finds that resources are at a premium, and nothing but ‘The Void’ exists below the known world. When Aiden convinces Sky City’s ruler that the New Order of the Stone are up to no good, you’ll need to make some tough choices to clear your name, and keep Aiden from destroying an innocent world.”