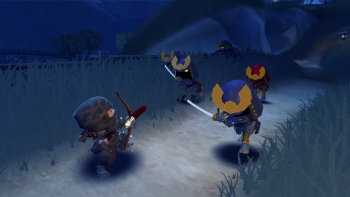 It’s a well-known fact that Smaller Equals Cuter. So, when Eidos’ Mini Ninjas hits shelves on September 8th, you best believe that these are the most adorable little assassins you’ve ever seen.

Ah, the Ninja. Such a pop culture symbol these days, though their standard portrayal as magical, vaguely-superhuman assassins of supreme stealth and technique is stretching the truth just a little bit. Still, does it matter? Ninjas are still awesome. Unless you’re a pirate, in which case, uh, they’re not.

And, as we all know, small things are cute, like puppies and kittens. So, even though Eidos’ Mini Ninjas might be carving their way through their enemies with swords, it’s… well, it’s somehow adorable, in a way.

As the story goes, chaos has enveloped the world, and after all the stronger, more experienced ninjas fail to save it, it falls up to the lone hero … um, Hiro, and the rest of his ninja clan in order to save the day and restore balance to nature.

“We’re incredibly excited to be launching the unique and beautifully quirky Mini Ninjas,” said Niels Jørgensen General Manager of IO Interactive. “The art direction and humor are endearing and it has won a special place in the hearts of the IO studio. Giving life to these fierce little ninjas has been an adventure in itself and we really hope that people will enjoy the game as much as we do.”

As per the gameplay videos on the site, it actually looks kind of interesting. They’ve certainly got magical ninja powers in spades including the ability to possess animals, to freeze time and plan attacks, and – though we haven’t seen it – I’m assuming they’ll have the ability to replace themselves with a log when attacked.

It also manages to look like a cross between Naruto, Zelda: The Wind Waker, and Animal Crossing. Either way, it’ll be sneaking into stores this September: the 8th in North America, the 11th in the UK and other PAL territories, and October 9th in France and Germany.

Mini Ninjas will be released on all major platforms. And I just totally got you stuck on TV Tropes for the rest of the afternoon. Ha!

China and the World of Tradecraft