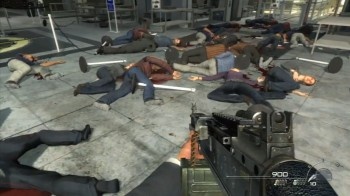 Activision says reports that Modern Warfare 2 was recalled or banned in Russia are untrue, pointing out that only the PC version of the game has been released in that country.

It was reported yesterday that the console versions of Modern Warfare 2 had been recalled from Russian stores as politicians and gamers alike expressed outrage over the “No Russian” level, which, as you should know by now, depicts a gang of Russian extremists slaughtering unarmed civilians at an airport. As one Russian gaming site noted, by way of a Google translation, the game “feeds the primary audience residing in the United States of America a story about the evil Russian!”

The anger is quite likely real, Russian nationalism being what it is, but according to Activision, the reports of a recall and ban are not. The offending scene has been excised from the game, the company said, but the decision to remove it was entirely voluntarily.

“Other countries have formal ratings boards that we regularly work with. However, Russia does not have a formal ratings entity. As a result, we chose to block the scene after seeking the advice of local counsel,” Activision said in a statement to Eurogamer.

“Reports that Call of Duty: Modern Warfare 2 has been banned in Russia are erroneous,” the statement continued. “Activision only released a PC version of the game in Russia which went on sale on Tuesday, 10th November.”

It’s really not all that surprising that only the PC version of the game has been released in Russia; I’ve been told by more than one developer that unlike North America, the PC still dominates the Russian gaming scene. (This is another reason why I love Russian games.) No word yet on when, or even if, the console versions will hit the shelves over there, but it’s a safe bet that when it happens, “No Russian” will be no more.