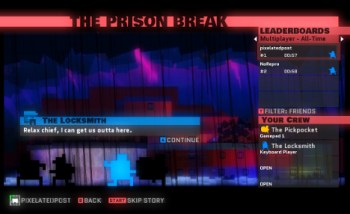 Xbox was never supposed to be the primary revenue generator, but even so, 360 sales are disappointing.

“The 360 delay unquestionably hurt our sales,” says Monaco developer and Pocketwatch Games founder Andy Schatz. When Monaco: What’s Yours Is Mine launched on PC and Xbox 360, the ideal situation would have been a simultaneous roll-out, thus keeping momentum strong, but bugs – only occurring on the retail boxes – killed that idea. It didn’t help that, in order to fix the issue, Pocketwatch had to work blind since it couldn’t test to reproduce the problem on dev kits. Pocketwatch was never expecting the Xbox 360 to be its primary source of cash, but Monaco‘s 360 issues turned out to be a real disappointment.

The demo didn’t help. “I don’t think the demo was particularly strong,” says Schatz, “so it could be that the game wouldn’t have done better on Xbox even if it had a simultaneous launch.” Schatz doesn’t think so, but anything’s possible. He’s still sore about the whole thing, since Pocketwatch put a ton of work into porting its heist-em-up to console. To have that work pretty much wasted isn’t his idea of fun. Nor was he willing to talk about Microsoft’s treatment of Pocketwatch during the development process, though from the hints dropped he’s not much of a Microsoft fan. But Pocketwatch’s publisher Majesco had been the go-between and Schatz doesn’t want to “piss in the pool, so whatever complaints I have I think it’s best I keep them between me, Majesco and Microsoft.”

Monaco, the co-op title that has you stealing your way through cunningly crafted levels in order to break out of the city, is currently available on PC and Mac via Steam, as well as Xbox 360.