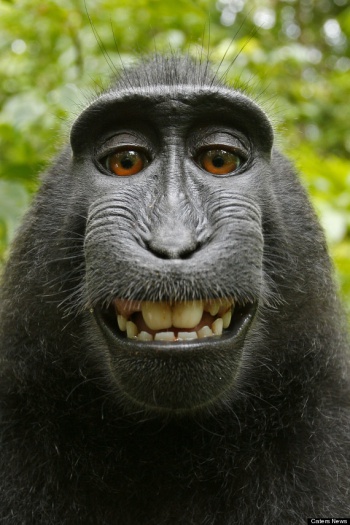 The Wikimedia Foundation claims that photographer David Slater does not own the copyright to the picture of the crested black macaque since the monkey grabbed his camera and snapped the photo itself.

Hundreds of selfies show up across social networks every day, but rarely do they lead to copyright suits. Or involve monkeys. Needless to say, there’s a barrel-full of weird circumstances in the case of David Slater, who claims Wikipedia and its parent company cost him thousands for improper use of his photographs.

First, some background – in 2011, wildlife photographer Slater took a trip to Indonesia to take some pictures of crested black macaque monkeys. During this trip, one of the curious apes took hold of Slater’s camera and took a couple pictures of itself. The photos went viral, as things involving monkeys on the internet generally do, and eventually ended up on two branches of the Wikimedia Foundation, Wikipedia and public domain photo hosting site Wikimedia Commons.

Slater asked Wikimedia to remove the photos, stating he owned the copyright, but Wikimedia had a different take. Since Slater didn’t actually take the monkey’s picture, there is no copyright to enforce, they stated, and they may use them freely.

In speaking with the Huffington Post, Slater said he was “angry” and “aggravated” by Wikimedia’s actions, before accusing Wikipedia’s editors of having “a communistic view of life.”

“It’s potentially being run by people with political agendas,” Slater said of Wikipedia. “The people who are editing it could be a new Adolf Hitler or a new Stalin … They’re using whatever suits their agenda.”

He urged people to stop using Wikipedia. “It’s important to tell people that Wikipedia should be not used as a source of truth,” he said.

A spokeswoman for Wikimedia sent the following statement to the Huffington Post on the matter:

We take these assessments very seriously, and researched both sides of the argument. We didn’t think the monkey owned the copyright — instead, our assessment was that there’s no one who owns the copyright. That means that the image falls into the public domain.

Because the monkey took the picture, it means that there was no one on whom to bestow copyright, so the image falls into the public domain.

In a separate interview with the BBC, Slater estimated he had lost somewhere in the neighborhood of £10,000 in income from the photo being made public domain. The debate over the picture resurfaced earlier this week after the Wikimedia Foundation published its first transparency report, following the lead of other tech companies like Google.