Now, generally I’m not the sort of person who likes to cheaply strawman their enemies by repeating their sentences back to them in a high-pitched mocking tone of voice, but here’s a brief summary of my email inbox after the Monster Hunter Tri review: “Mneh mneh mneh. You didn’t play it long enough. Mneh mneh mneh. Metacritic said it was good. Mneh mneh mneh. I just did one in my pants. Mneh.”

I won’t bother quoting specific examples, suffice to say there were a lot of them. The main thrust of the argument was that Monster Hunter Tri totally gets good once you’ve gotten past the tutorial, which takes about ten hours of gameplay.

Ten hours. Do you people listen to yourselves? Maybe if I had your kind of wealthy, privileged lifestyle and could spend most of my days idly playing Wii by the pool as a team of oiled bodybuilders fanned me with palm fronds, but some of us have jobs to do. Articles to write. Other, better games to review. Fun Space Games to avoid working on. As I’ve said time and again, “it gets better later” as an excuse does not wash for me. Even if the game is 50 percent poo and 50 percent mind-blowing envelope-pushing extravaganza, that’s still mediocre on average.

I have a simple rule when playing a game to review. I play until the game is finished, or until I can’t stand any more. And if the game ever falls below that point of tolerance, that’s an automatic write-off. You know when you play Guitar Hero, and you’re given a fail if you play badly for long enough for the crowd reaction to sink below the red? You don’t get to play the rest of the song, and you don’t get any points based on how well you might, potentially, have played it. I use the same approach for reviewing games. If I’m fed up to the back teeth, out the console you go. No buts. No reprieves. No more of it for me.

Besides, does the game really get better after ten hours, or is that just the point when you become numb to the pain? Unless at that magic ten hour mark the game goes “Ha ha, just kidding, here’s a completely different game” and magically transmutes the disk into Shadow of the Colossus or something, I don’t see how it could significantly improve. It’d need to change a lot of the interface, for a start. Someone explain to me how it makes sense that you can only change your equipment in your bedroom. Well, sure, OK, it would make sense in real life, but what if I’m in the overworld fighting big slow lumbering monsters with my giant two-handed sword, but now I’ve spotted some of those quick, whippy little bastards and want to switch to a shortsword and shield? I’d have to go all the way back home to do it. That’d just be embarrassing. Like having to come back to school in the evening because you left your P.E. kit there. 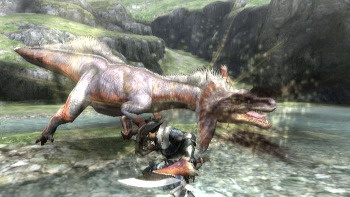 And what if I forget to switch to an appropriate weapon before I start a quest? You get locked into quests, there’s no way to change equipment once you’re in it. You either have to try and fight skittish pterodactyls with a warhammer, hoping to God that they’ll eventually calmly sit on the ground for the eighteen seconds necessary to swing the bloody thing, or you quit the quest and lose your deposit. And that reminds me, why the fuck do I have to pay to start a quest? What the hell kind of nightmarish bureaucracy is running the Adventurer’s Guild? How about I just save the money and not solve your problems for you, peasants, how about that? You can gather your own 10 velociraptor eyebrows.

My main complaint in the video was item gathering, how foraging for random bits of garbage in the wilderness got in the way of the juicy fighting, and it was virtually impossible to predict what items were only worth flogging at the village store for pennies and which would be worth hanging onto. Someone pointed out that at some point you can employ some of the villagers to grow and gather certain resources on your behalf. But that’s even worse! That’s entering management simulator territory, the genre one step up from database software. At least gathering the stuff yourself has the exploration element. The threat of curious velociraptors trotting over to inspect my pancreas as I scrape out the contents of a beehive. Maybe next I could pay someone to kill all the monsters for me so I can spend the entire game sitting in my hut kicking the butler.

But of course the actual point of the game is the fights with giant monsters. That’s what all the ancillary pottering about is leading up to and the most glaring absence from the main points of my review. Well, I did actually play far enough to start doing those. The last mission I played was one that had me hunting and killing some giant version of the velociraptor lads.

Basically this involved me smashing my shortsword against his flank over and over and over again, chipping away at his wretchedly massive amount of health for half an hour because every other weapon was so fucking slow to use that he’d jump out of the way and slap me across the chops with his tail in the time it took to swing them. This isn’t even mentioning the weapon degradation system, for which someone badly deserves a mongoose up the trouser leg. Every ten hits or so (with the stupid, stupid Wiimote controls) my sword would lose sharpness, to the point that every other blow would bounce ringingly off the monster’s hide as if I’d hit the thing with a fucking bamboo walking stick. So I’d have to pick between trying to get through the fight with a half-useless weapon or run off to slide a whetstone slowly along the blade with even odds whether or not the boss and all his friends come over and interrupt me with murder.

But eventually the beast had the sheer common decency to roll over and die and I returned triumphant to the village, where I was congratulated, then told that various clones of the boss monster would now be appearing throughout the overworld. And if I’m not too busy maybe I could gather up ten of their claws.

That was it. That was the moment the boos and jeers of my little internal Guitar Hero audience drowned out Monster Hunter Tri’s performance and it was booted unceremoniously back to the song list. I would subject myself to more of it only on the day I am diagnosed with brain cancer and wish to expedite the growth of the tumor to end my painful, unpleasant life faster. There you go. That was your bonus review expansion pack. Up yours, Monster Hunter Tri fans. Up yours with blobs of Icy Hot on the end.

Rockstar Pulls Out of E3