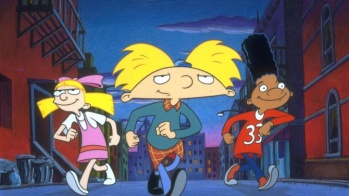 A new TV movie based on the hit 90s TV show is currently in development.

This may just be the nostalgia talking, but the 90s and 2000s were turely the golden era of Nickelodeon programming. CatDog, Rugrats, The Angry Beavers, Invader Zim… the list goes on. Right near the top of those awesome 90s Nicktoons is slice-of-life cartoon Hey Arnold!, which followed the antics of our grade school-aged football-headed protagonist and his friends, growing up in the inner-city. The good news for you 90s kids is that Arnold is coming back, with Variety reporting that a brand-new TV movie based on the series is currently in development.

The movie will pick up where the show left off when it ended back in 2004. Its plot will aim to tie up many of the loose ends left over from the show – including the whereabouts of Arnold’s parents, who are noticeably absent. Unfortunately, executives at the network declined to state exactly when this movie would be airing.

What’s even better news is that this may just be the first step of many more classic revivals. “Kids who grew up on these characters are now of the age that they are having kids and families themselves,” said Russell Hicks, president, content development and production, for Nickelodeon Group, in an interview. “Our library has come to fruition and it’s time for it to start coming back to life.”

Let’s just hope this one is a little better than the last Hey Arnold! movie.