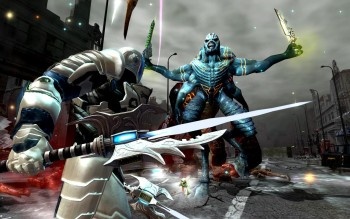 HanbitSoft, the Korean publisher that owns Hellgate: London, is interested in relaunching the game in the US and Europe, but can’t because of Namco Bandai’s license on the game in Western territories.

Good news and bad news for people still interested in what used to be Flagship Studios’ troubled Hellgate: London. Good news: HanbitSoft, the Korean company that swooped in and bought the property after Flagship went down in flames, has heard the cries of Western gamers still eager to get their Hellgate on and want to relaunch the game in Europe and the US.

Bad news? They can’t do it…legally. “HanbitSoft does own the intellectual property of Hellgate: London and is interested in providing the game in the US and Europe, but is unable to do so at this time because Namco Bandai has the publishing rights for those regions,” Kee Young Kim, CEO of HabitSoft, said.

Technically, HanbitSoft wouldn’t be so much relaunching the game in the complete sense of the word. Specifically, the servers that Namco shut down at the end of January this year would stay shut down – HanbitSoft would only open up the Korean server so that US and European players can access it. Unfortunately, this “will constitute infringing upon Namco Bandai’s publishing rights in the US and Europe.”

HanbitSoft says they’re “doing its best to improve the game,” and are clearly committed to bringing the game to the West – they’ve already got a studio set up in San Francisco that’s working on the game at the moment. Maybe they’ll work something out with Namco, who are just sitting on dead servers anyway. So keep hope alive. I mean, that’s if you even still want to play the game again.