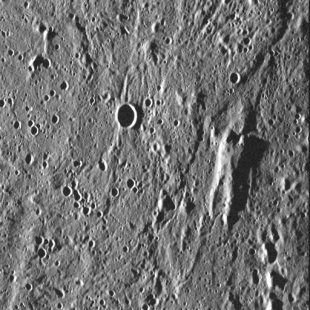 NASA has revealed a picture taken by its Messenger probe that resembles a particular Star Wars character frozen in carbonite.

Back in 2011, NASA’s Messenger probe apparently snapped a shot of the planet Mercury that was clearly eye-catching for the army of nerds we’re assuming make up the ranks of the venerable organization. The image, just recently released to the public, shows a terrain formation on the surface of the planet that looks markedly similar to Han Solo frozen in carbonite.

NASA’s response to the image is equal parts scientific and fantastic. “A portion of the terrain surrounding the northern margin of the Caloris basin hosts an elevated block in the shape of a certain carbonite-encased smuggler who can make the Kessel Run in less than 12 parsecs,” they posited. “If there are two things you should remember, it’s not to cross a Hutt, and that Mercury’s surface can throw up all kinds of surprises.”

While we obviously accept the logical explanation of weird stuff just happening, we can’t help but admit that our nerdier half isn’t content to chalk this up to galactic happenstance. For instance, what if, at some point in the Star Wars timeline, reality split? In the movie reality things went as we saw them in Return of the Jedi. Boba Fett gets eaten by the Sarlacc, our heroes get away, destroy the Empire and live happily ever after until Episode VII. In our reality meanwhile (because Star Wars is real), Boba Fett escaped the Sarlacc pit, captured Han again, refroze him and then deposited him on Mercury as vengeance. Granted, Star Wars takes place in a “galaxy far, far away,” but if they took the Millennium Falcon it couldn’t take too long to get here. Han was always bragging about how fast it was, after all.