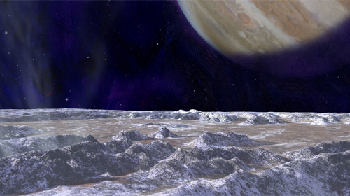 The space agency is currently designing a mission that will cost less than $1 billion and still meet as many of the exploration goals as possible.

NASA is taking design submissions of scientific instruments that would help detect life during an exploratory mission of Europa. The deadline to apply is on October 17, and the winning instrument will be chosen next year to be built for a future mission to Jupiter’s moon.

It is theorized that underneath Europa’s icy crust lies an abundance of liquid water- an ocean with more water than all of Earth’s oceans that could potentially support life. “The possibility of life on Europa is a motivating force for scientists and engineers around the world,” said John Grunsfeld, who is the associate administrator for NASA’s Science Mission Directorate. “This solicitation will select instruments which may provide a big leap in our search to answer the question: Are we alone in the universe?”

Recently, the U.S. National Research Council published its yearly report with recommendations for NASA and the National Space Foundation’s planetary exploration strategy. Covering now until 2022, the report ranked a mission to Europa among the highest priority missions. A future trip would focus on thorough compositional investigation of both the crust and the suspected liquid underneath the surface- as well as understanding the moon’s magnetosphere.

Officials from NASA stated that submitted instruments should be specialized to achieve one of those goals. The announcement calls for instruments designed for a spacecraft that will orbit Europa or complete several flybys, since astronomers currently lack the data to safely land on the moon. The submissions will also need to be protected from radiation, as Jupiter is surrounded by a massive amount.

NASA will select 20 proposals in April 2015, and award $25 million to those chosen so that they may further improve their instruments’ designs. From there, NASA officials will select eight winners, build the winning instruments for flight, and send them to Europa.

Read more about NASA’s upcoming missions here and let us know what you think in the comments!