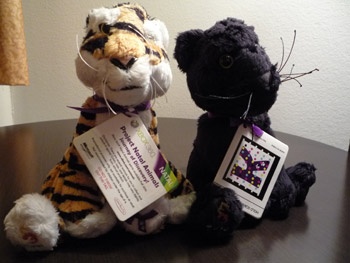 Microsoft’s Project Natal Experience was a special-effects laden extravaganza that had girls walking on the ceiling, ponchos that changed color on command, and even an elephant. Oh, and a gaming peripheral, too.

The ostensible point of the evening was to give us our first real look at Microsoft’s motion-sensing Xbox 360 controller, now dubbed Kinect, but the real object was to blow us away. We were meant to leave the Galen Center, jaws brushing the floor, and at first it seemed like we just might. The entire theater was done over in tropical greenery – from my seat, I could actually smell the flowers – with a rock promontory reminiscent of The Lion King at one end. The members of Cirque du Soleil prowled around in various wild costumes, amusing and enthralling the crowd as we waited to find out what was going on. A family was seated on a couch suspended high in the air. A shaman sat tranquilly on a rock. A gorilla scampered around. It was…well, it was all very, very Cirque.

After an extended delay, (due to either malfunction or the late arrival of VIPs who wanted to catch the Lakers game, depending on your conspiracy theory of choice), the show finally began. As an enormous elephant shambled into the room, an announcer waxed philosophic on the relationship between man and technology. I have to confess, I was so enraptured by the enormous pachyderm, I missed much of what he was saying. The elephant was an incredibly complex puppet, with who knows how many operators inside, that looked and moved so genuinely that if it weren’t for the digital screen on its flank, I could’ve sworn it was real.

Eventually, the announcer got to his point – that perhaps in the future, technology would evolve to the point that humans were once again the centerpiece, as opposed to objects. Perhaps for technology to advance it had to disappear. Or something like that. Did I mention the elephant? That thing was amazing.

At this point, a young boy had begun to climb the rocks, controller in hand. He played and climbed, played and climbed, until he reached an enormous sphere, which soon lit up with a very familiar green X and slid higher so that the boy might leave his controller behind and become one with the game. Facing a giant screen, he moved first his arms, then his legs, and his avatar mimicked his movements. The screen slid aside to reveal a family waiting to greet him. He stepped through to join them, they sat on the couch…and then the room flipped the hell over so that they were sitting upside down and the cute girl with the blonde ponytail who’d been lounging against the wall calmly strolled out the door by walking across the ceiling.

If you’re thinking this sounds like one hell of a show so far, you’re dead right. This was grand theater, expertly done. Microsoft certainly had our attention – but unfortunately didn’t do all that much with it. What followed was a series of game demos, most of which were boringly reminiscent of Wii games. There were minigames galore – river rafting, kart racing, airplane flying – if you want to fling your body around to collect tokens, Kinect can hook you up. There was also a bowling game that looked pretty shabby compared to Wii Bowling, and a track and field game that didn’t look nearly fun enough to justify its exhaustion level. (Seriously, if I want to run that much, I’ll just go running. It’ll be far more enjoyable.)

Some demonstrations did show exciting potential, though. A Star Wars snippet demonstrated the delicious possibility of actually gesturing to use your Force powers. Force push by actually pushing? Please and thank you. We also saw a tai chi game that could check your body for proper form and displays the results on the screen, highlighting the joints you need to adjust. A dancing game took a similar approach, by illustrating the moves, then asking you to repeat them. The party potential for that one is obvious, so long as you can get the right music to go with it.

Then came the baby tiger in what looked to be a cross between Nintendogs and NeoPets. You get a cuddly baby tiger, panther, or cheetah, then pet and play with them by gesturing at Kinect. If you people know me at all, you already know what I think about this one. We were given plushies at the end of the night whose tags will unlock exclusive content in the game; just show the tag to the camera for a few seconds, and presto – the content is added to your game.

Eventually, the demos ended, the performance wound down, and we finally found out why we were all wearing a bunch of dorky white ponchos with enormous shoulder pads. As a young boy passed a ball of light back to the family on the couch – no, I have no idea why – chips in the ponchos made the crowd light up in different colors. Now we were green, now red, now purple, now glittering like the stars above. I felt like I was at the opening ceremonies for the Olympics. And then we danced to “Hella Good” by No Doubt. No, seriously.

Except for the tiger baby, whose tag refers to the game as Project Natal Discovery, though obviously that will change, it’s hard to say which demonstrations we saw were from genuine games, and which were just for the sake of showcasing Kinect’s abilities. A lot of what we saw was barely worthy of a shrug – we’ve seen it done already on the Wii, and it didn’t blow us away there, either. There were a few tantalizing standouts, but for the time being, I’m still feeling a bit unsure of Kinect’s genuine viability. Being able to flick through movies and pictures without a controller is fantastic, yes, as is video chatting, but do I really want to jump around that much to play a videogame? I still don’t know.

I hope to have a more solid answer for you before the week is out. Stay tuned.

[I]If you want to see the Microsoft Kinect Premiere yourself, it will be airing commercial-free on MTV tomorrow, Tuesday the 15th, at 3:30 PM. It will be also aired later that night on other Viacom-owned networks: Look for it on Nick at Nite, mtvU, MTV Hits, and Logo, at 9:00 PM (still Tuesday, June 15th).

Anyone For a Game of Lego Robo-Chess?