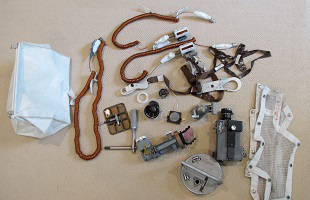 NASA catalogs a bag of Apollo 11 lunar landing gear that was tucked away at Armstrong’s home.

Neil Armstrong passed away in August 2012, but the first man to set foot on the moon is still surprising us — and NASA — over two and half years later.

According to a recent report by NASA, Armstrong’s second wife-now-widow, Carol, found “the Purse” in a closet at their home in Ohio. The bag contained a treasure trove of NASA gear from the Apollo 11 lunar mission — most of which was seemingly useless upon return to Earth, sentimental value aside. The hardware is now on loan to the Smithsonian’s National Air and Space Museum, where it’s been cataloged by curator Allan Needell.

“These artifacts are among the very few Apollo 11 flown items brought back from Tranquility Base and, thus, are of priceless historical value,” says the NASA report.

The most important piece of gear among the contents of the bag is the “Data Acquisition Camera” — a 16mm film camera with a 10mm lens attached. This was the very camera that was mounted to the forward window, which showed the now-iconic footage of the lunar module making its final descent to the Moon’s surface.

Check out the gallery below, which showcases all the new-found Apollo hardware, and the source link for more in-depth descriptions of the hardware and its mission purpose.