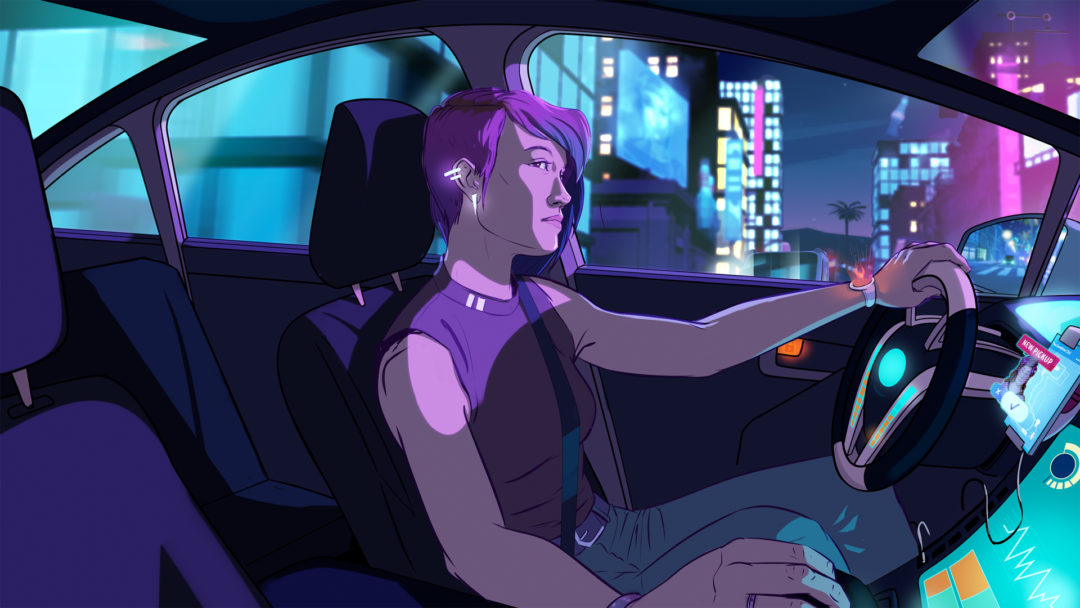 While still hard at work on Campo Santo’s Firewatch, Patrick Ewing had an idea for a game about a cab driver trying to solve a disappearance. Over the next three years, Chance Agency’s Neo Cab unconsciously morphed into the anti-Firewatch.

The autumnal yellows and oranges of 1980s Wyoming were replaced by the harsh neon blues and purples of the fictional near-future Los Ojos. That shift from country to city, and past to future, required a shift in character writing as well.

“Tonally, it’s the complete opposite,” Ewing said. “Firewatch was about a relationship between two people unfolding. Neo Cab is about [briefly meeting] countless people.”

In Neo Cab players take on the role of Lina, one of the last human rideshare drivers in a mostly automated future metropolis. Lina comes to Los Ojos to live with Savy, an old friend and her only contact in town. But on Lina’s first night in the big city, Savy vanishes. Worried, homeless, alone, and broke, Lina has to investigate her friend’s disappearance in-between earning enough cash to afford a bed to sleep in every night.

Ferrying passengers — “pax,” in the game’s future-lingo — will earn Lina the scratch she needs to keep gas in her tank and a roof over her head, but money isn’t the game’s most precious resource. Ewing described Neo Cab as an “emotional survival” game. Unlike traditional survival titles like Don’t Starve or Subnautica, where physical needs like hunger need to be met, Neo Cab tasks players with managing Lina’s emotional needs.

Neo Cab is built on an emotional feedback loop. How players interact with their fares will affect Lina’s emotional state, and Lina’s emotional state dictates how she can interact with her fares. Certain dialogue options will be present or withheld depending on Lina’s mood. Players will also get a certain amount of control over Lina’s internal monologue and can choose how she interprets or contextualizes certain comments.

“If someone says something really rude to you, you can say, ‘Ah, he didn’t really mean it,’ or, ‘I’m so frickin’ pissed, the nerve of this guy!’ Those sorts of things will drive Lina’s emotions, and that’s going to change what your options are down the line.”

Lina’s mood is visualized for the player by her Feelgrid, a device on her wrist that monitors and displays her emotional state at all times. The Feelgrid contextualizes Lina’s emotions by placing her somewhere on a grid with two axes, vertical for her energy level, and horizontal for her mood. It then outputs that grid position as a symbolically legible color — red for the anger and anxiety of high energy / low mood, blue for the moroseness of low energy / low mood, yellow for an excited high energy / high mood, etc.

By using the Feelgrid as a guide, players can keep Lina from careening too far towards emotional extremes, risking her mental health, or saying something she’ll regret. Staying calm and collected will be a valuable emotional asset, but the game isn’t about ensuring Lina is as unemotional as possible. Neo Cab will be careful to depict all emotional states as equally valid in their own right, but for a service worker running a missing person case on the sly, extreme emotional displays can be a liability. 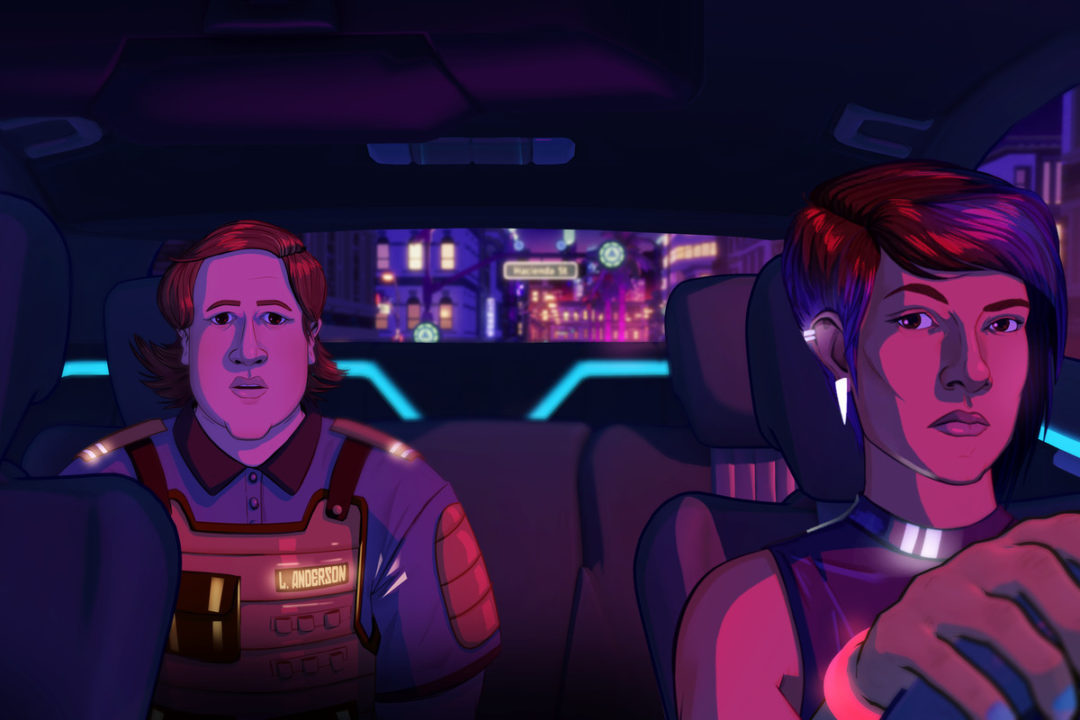 “The belief is that while there’s no ‘wrong’ emotion, emotional extremes are not a place you want to hang out in. You know, if you get too happy, you become manic, if you get too upset, you become ragey. So when you allow the character to cool off, she moves more towards the center,” Ewing explained. “And generally you want to be a centered person, but sometimes anger is justified, even powerful. Sometimes sadness is justified, and lets you share something with a passenger, and helps you connect.”

This all builds towards an emotional climax, a sort of mood-driven internal boss fight for Lina that will test players’ understanding of her emotional needs and abilities. “By the end of the game, once you’ve learned how her emotions work, what her triggers are, what choices you want to make, maybe you feel a little more in control of those emotions,” Ewing said. “This builds to an emotional battle at one point, and these sorts of skills should play into how you do there.”

The Good Place Is Hilarious, Subversive, and Teaches Us How to Be Better People

Rambo Brought the Vietnam War (and Its Scars) Home