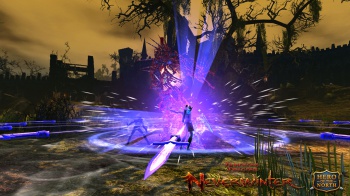 As Perfect World Entertainment and Cryptic Studios’ Dungeons & Dragons MMO Neverwinter moves closer to completion, the free-to-play game is planning to enter the open beta phase, making it accessible to everyone. The Neverwinter open beta begins on April 30, with Cryptic Studios Executive Producer and COO Craig Zinkievich stating, “That’s when the world we’ve labored for years to build comes to life–that’s when every gamer can log in and play what we’ve worked so hard to create.” According to a press release, there won’t be any character wipes or restricted access once the open beta is underway, so interested parties won’t have to worry about losing progress.

Those who have purchased the pricey Founder’s Packs will have more to look forward to in the world of Neverwinter before it opens to all. Starting on April 12, a 60-hour special beta weekend will introduce the MMO’s professions system, with four professions becoming available: Leadership, Mailsmithing, Platesmithing, and Leatherworking. This is the fourth beta weekend for Perfect World and Cryptic have organized for Founders, with Cryptic CEO Jack Emmert calling them “our biggest supporters.”

The press release states that Neverwinter‘s creators believe “that Western free-to-play games, when built from the ground up, can compete with even the biggest boxed subscription titles.” They expect the open beta will prove that theory; of course, only time will tell if Neverwinter leaves a lasting impression on MMO fans.

Witcher 3 Devs “Trying to Get Rid of DRM”