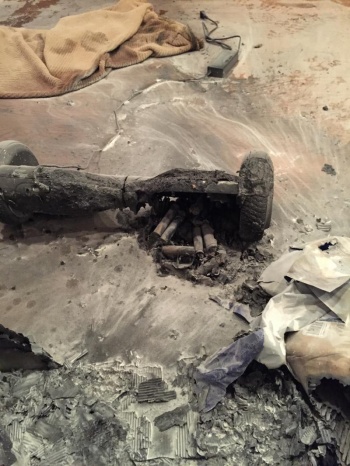 One of 2015’s biggest new products, a “hoverboard,” kept catching fire, likely due to its reliance on dangerous batteries. A new battery that shuts down before overheating may solve this problem.

Our long, international nightmare is over: our hoverboards are no longer exploding. Wait – we had hoverboards?

Alright, sure, these boards do not actually hover. They are self-balancing scooters – pretty cool, yes, and you might feel like you’re hovering when you’re on one, but everyone else can see two wheels planted firmly on the ground.

They tend to explode and ruin Christmas when their lithium-ion batteries overheat, a problem a number of fun gadgets have had over the years. Recently, however, Standford scientists announced they may have solved this ongoing problem with a new type of battery, one which shuts itself down before it overheats.

Nanotechnology is at work here – making the batteries that power the hoverboards inherently cooler than the boards themselves. Specifically, microscopic nickel spikes coated in graphene are what conduct the electricity amongst themselves. When heat causes the material to expand, the nickel spikes can no longer touch each other, thus ending the current and cooling the battery off. All in all, a straight-forward (despite the nanotech part) fix.

Tragically, this technology will put a serious damper on the booming “flaming hoverboards” cottage industry.

Survive Your First Day in The Long Dark With These Tips