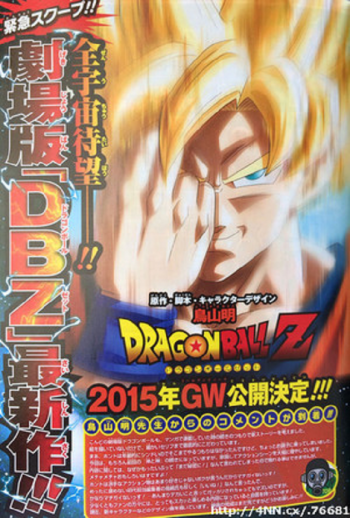 The new Dragon Ball Z flick will serve as a sequel to 2014’s Battle of The Gods.

Last year’s Dragon Ball Z: Battle of The Gods was the first Dragon Ball Z theatrical release in Japan in 17 years, and its even making its way stateside this summer. Thankfully, we won’t have to wait another 17 years for the next installment of Goku’s story, as series creator Akira Toriyama has announced a new DBZ flick will be released in Japan in 2015.

The new film doesn’t appear to have an official title yet, but is currently scheduled to premiere during the “Golden Week” holiday period in Japan (a string of Japanese holidays that straddle the end of April and beginning of May). Just like Battle of The Gods (and unlike the forgettable Dragon Ball GT), Toriyama will have direct involvement with the new movie, taking charge of the character designs and script.

He revealed that it will serve as both a sequel to Battle of The Gods, and a broader continuation of the Dragon Ball Z manga. “I’ve been getting into the minute details of fine-tuning the dialogue,” he added. “Really, it’s too much for a guy my age to be taking on, but I just got caught up in the excitement of making the movie.”

Toriyama also said that he has made a “conscious effort to ramp up the action” this time around.

Fatal Frame: The Black Haired Shrine Maiden Will Release On Wii U This September