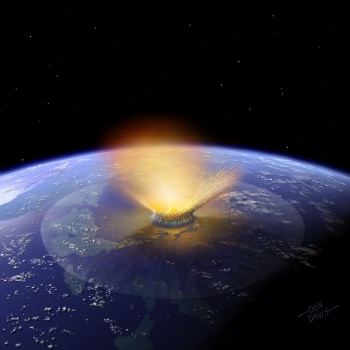 The theory that dinosaurs were wiped out by an asteroid has gained more legitimacy.

The theory that an asteroid impact near Chicxulub, Mexixo helped to cause the Creataceous-Tertiary extinction event (K-T) that wiped out the dinosaurs has gained major support from a report out of the University of California at Berkeley. The researchers studied volcanic ash at Chicxulub and in Montana, at a site with a huge number of dinosaur fossils from the estimated impact period. Radiometric analysis says that the impact and the K-T happened no more than 33,000 years apart. Radiometric dating lets scientists estimate ages based on the decay of materials – this case, potassium – in the soil. The extinction date we now have is accurate to within 11,000 years, and is the climax of nearly a million years of dinosaur decline set off by climate change.

“We’ve shown the impact and the mass extinction coincided as much as one can possibly demonstrate with existing dating techniques,” said Paul Renne, one of the researchers. As to the timing of the impact and the extinction, Renne said that “the impact was the final straw that pushed Earth past the tipping point. We have shown that these events are synchronous to within a gnat’s eyebrow, and therefore the impact clearly played a major role in extinctions, but it probably wasn’t just the impact.”

What set off the decline of the dinosaurs was dramatic climate swings in the million years before the Chicxulub impact, possibly combined with volcanic eruptions which releasing huge amounts of sulfur into the atmosphere. “These precursory phenomena made the global ecosystem much more sensitive to even relatively small triggers, so that what otherwise might have been a fairly minor effect shifted the ecosystem into a new state.” Some scientists, like some gamers, had been rethinking the role of dinosaurs in the extinction event – and whether or not a simple impact was enough to wipe out such resilient groups of species. The new model serves as a synthesis which may satisfy both parties, but will likely ignite a fierce round of scientific debate.