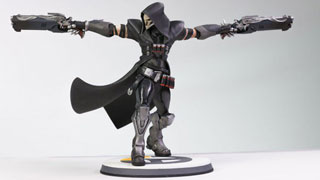 It’s safe to say that Overwatch is one of the more popular games of the year. Combine that with Blizzard’s penchant for having some cool tie-in merchandise, and you could just about bet that we’d see some cool merchandise for the team-based shooter.

Enter the new Reaper statue. Standing a foot tall and constructed of polystone, the sculpture was created by Blizzard sculptor Brian Fay. It depicts Reaper in the midst of using his ultimate, a pose that most Overwatch players have seen far too often.

The new statue is currently available for pre-order with a limit of two per person, and it will set you back $150. It appears that Blizzard is – understandably – expecting high demand, as the statues are slated to ship in two waves. The first wave will ship before the end of Q1 2017, which means before March 31. The second wave will go out before the end of Q3 2017, or before Septemeber 30.

You can pre-order yours at the Blizzard Store.

The Game Awards to Feature an Exclusive “New Look” at Zelda: Breath of the Wild