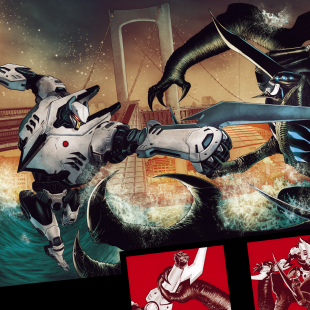 Pacific Rim: Tales From the Drift will be a new prequel comic with “never before seen” Jaegers fighting “all-new Kaiju creatures.”

Speaking as a wholly rational and unbiased individual, I feel safe in saying that there is nothing cooler in this world than giant robots. If you want proof, you need look no further than Pacific Rim. While I absolutely loved that film and think it’s competent across the board, it still has its fair share of moments that feels a bit silly and generic. None of that matters though because the second the giant robots start punching the giant monsters, it becomes a piece of action bliss the likes of which cinema has rarely seen before. Put shortly, giant robots are awesome and we need more of them.

Recognizing that fact, the folks over at Legendary Comics have announced plans today to launch a new comic series based in the Pacific Rim universe. Dubbed Pacific Rim: Tales From the Drift, the new book will be a direct continuation of Pacific Rim: Tales From Year Zero. Year Zero was a prequel to the film that focused on the early efforts of humanity to combat and contain the Kaiju threat. Tales From the Drift will pick where that book left off and deliver fans a collection of new battles featuring “Jaegers never before seen in combat, squaring off against all-new Kaiju creatures.”

This new comic series is, of course, just the latest in a series of planned efforts to continue the Pacific Rim franchise. A feature length sequel to the original is currently slated to release on April 7th, 2017. An animated series is also in the works to help bridge the gap between now and then. Pacific Rim: Tales From the Drift itself will land in comic stores in November 2015 and will feature writing from Joshua Fialkov and art from Marcox Marz.

You Can Play Pac-Man In Google Maps