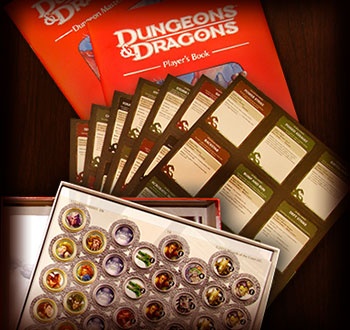 After more than three decades of change and development, Dungeons & Dragons is going back to its old-school roots.

Dungeons & Dragons has changed a great deal since the days of the original red box rules in the early eighties, and some accuse owners Wizards of the Coast of straying too far from the core appeal of the game. But the release of a new red box seems to signal a reversion to a more “old-school” style of game, and in Issue 267 of The Escapist, Alexander Macris talks to the head of D&D’s development team, Mike Mearls, about the changes he’s bringing to the game’s fourth edition.

Wizards is changing [Dungeons & Dragons] 4th Edition in response to feedback, releasing an innovative set of new products that aim to recapture the classic feel many fans had missed. The first of these, the 4th Edition Red Box, launched last week, and aims to recreate the wonder that kids felt in the 80s picking up a strange new game.

“The basic gist of the Red Box is to create an easy entry point into D&D,” Mearls said. “If you look back at the launch of 4th Edition, the game was really aimed at existing D&D players. The idea is really just to cut down the time between ‘Hey, I bought this game’ and ‘I’m playing it.’ That’s something that – especially within the past 5 or 10 years – gaming culture is much more focused on. The time between when you first interact with a game and you’re playing it is getting shorter and shorter and shorter. The Red Box is all about saying ‘you buy this box, you take it home, you unwrap it, and you’re playing within two minutes.’ You’re not reading through 50 pages of combat rules, trying to figure out how it works. There’s an immediate entry point.”

Mearls hasn’t turned the clock all the way back on D&D. The new Red Box is still 4th Edition, but it has a lot more of the characteristics of the earlier days of the game, something that is sure to make old-school fans happy. You can read more about it in Macris’ article “Red Box Renaissance,” or read the interview in full.