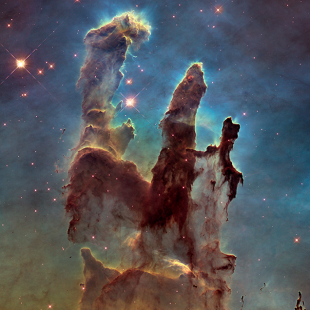 In celebration of its upcoming 25th anniversary, the Hubble Space Telescope has once again photographed the Pillars of Creation in the Eagle Nebula.

The Hubble Space Telescope went online in 1990, and its 25th anniversary is coming up this April. In celebration, scientists have been pointing Hubble at some old but classic sights in order to recapture them with upgraded technology for a better view.

One of Hubble’s most famous images is of a feature in the Eagle Nebula, which is 6,500 light-years away, called the Pillars of Creation. The image captures clouds of interstellar gas and dust – which serve as nurseries and birthing spots for stars – being eroded by the harsh light and UV radiation of nearby newborn stars.

The first image of the nebula was taken in 1995, and Hubble’s revisit, 20 years later, observes the feature in visible and near infrared light.

“We have caught these pillars at a very unique and short-lived moment in their evolution,” Paul Scowen of Arizona State University told NBC News. “The ghostly bluish haze around the dense edges of the pillars is material getting heated up and evaporating away into space.”

Not only are we seeing the Pillars of Creation in more detail, we are also seeing how the structure has changed over the years. Though the changes may be imperceptible to some at these vast distances, the features are actually in a great amount of flux. One of the small jet-like structures, for instance, has been expanding at about 450,000 miles per hour and has traveled 60 billion miles in the past 20 years.

Check out the comparison image, as well as a new infrared image of the Pillars of Creation, below.

The Honorable and Dishonorable Game Mentions For 2014