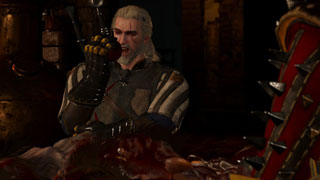 Just in case The Witcher 3 isn’t immersive enough for you, there’s a new mod that adds survival elements to the game.

The Witcher 3 already commands well over a hundred hours of your time, but what if the game included survival elements, forcing you to monitor Geralt’s hunger, thirst, and fatigue? If that thought intrigues you, then there’s a new mod you should check out.

The Primal Needs mod adds a new UI element that tracks those three needs, and there’s more to it than just eating and drinking when you get low. The thirst meter fills more quickly than the hunger one, but drinking also empties the bar more quickly. Get too thirsty, and your stamina won’t regenerate.

Food now heals less than it did previously, and has an expiration date. Food is also more scarce than before, but Geralt can find food by killing monsters. Reaching critical levels of hunger will cause your vitality to slowly drain. Fatigue is reduced by meditation. If fatigue is too high, Geralt won’t be able to sprint, dodge, block, roll, or even run.

In the mod options, you can turn each need on or off as you desire. You can find more info on how it all works, as well as download the mod, over on its Nexus Mods page.

Check Out What Shelob Looks Like in this New Middle-Earth: Shadow of War Trailer