Ever since its new trailer was shown off at The Game Awards, Amazon’s upcoming massively multiplayer online game New World has been back in the news again. The basis of the title, and one that helps it differentiate itself from other MMOs on the market, is that players are able to create settlements throughout the game world.

This can potentially lead to massive 50-versus-50 multiplayer battles, as well as potential uprisings if players feel they are being treated poorly by leadership. Naturally, worries have arisen that the game could be glamorizing the topic of colonization, a horrible act that has shaped history.Thankfully, some key story decisions have kept the title from falling down such a rabbit hole.

An important aspect of colonization, and what separates it from just creating a settlement in an uninhabited area, is taking control of land away from indigenous people. Obviously, any attempt at making the player seem like a hero while committing such atrocities would be in poor taste.

However, that isn’t the case in New World, whose fantasy setting stems from a collapsed society filled with corrupted explorers. The in-game enemies have all been corrupted by a magic that also grants immortality, and they are former settlers themselves.

They have been detached from their humanity thanks to greed and are now more monster than man. Furthermore, director Scot Lane has explained to Eurogamer that the game’s Aeternum island is an entirely fictional setting and that it has nothing to do with America and its history.

It’s worth noting that there have been games based around the idea of colonization in the past. Most notable are Sid Meier’s Colonization and its Civilization IV remake, which has the player building a worldwide power using an army from England, France, The Netherlands, or Spain. Of course, these turn-based strategy games are based on history and largely get a pass on the issue to some degree because acting like colonization hasn’t had a huge impact on history is just as dangerous as celebrating it.

We can’t erase problematic elements from history, and if a game wants to explore such a time period, then it should be able to. Ultimately, players have the moral authority to play as they please or even abstain entirely from the experience should they not want to participate.

Players in New World will be given the opportunity to do better than their corrupt predecessors. The allure of magic still stands, and there will be plenty of tests of players’ own greed along the way. Those that start a settlement will be able to enforce tax rates and even come up with plans to grow their colony. Higher tax rates can be appreciated if they go to good causes (such as building fortified walls and more advanced shops), but they can also alienate those struggling financially. 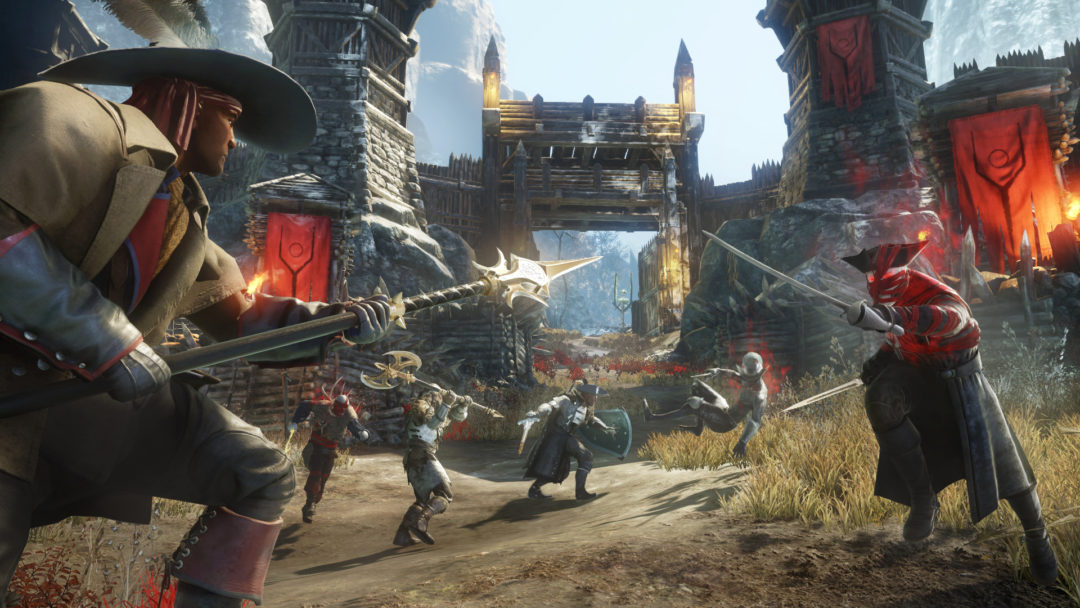 More tyrannical players will quickly learn that there is a penalty for their actions, as players can choose to support an invading faction during a war if they prefer their way of life. Much like a good leader in real life, those that control a settlement will have to listen to their inhabitants and make sure their needs are being met if they want to continue having a high place in society.

While the player-versus-player multiplayer is optional in New World, it gets at the game’s core theme of cooperation. In order to create a successful settlement, players will need to support each other and work together for a goal that is greater than one person’s wants and desires. It’s about coming together and doing the right thing. It’s entirely possible, if quite unlikely, that New World could wind up being a peaceful game with different settlements that are willing to work together and help out others as they battle the corrupted.

It’s more likely that the world will be ravaged by nonstop war caused by greed, similar to our current world, but the option is there for players to be better. How the world ends up will ultimately be decided by its players, and that’s what makes New World such an intriguing spin on MMOs.

Watchmen for HBO Is Constructed with Clockwork Precision