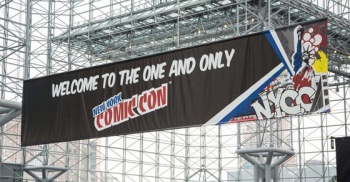 Though many people consider San Diego Comic-Con to be the year’s biggest geek culture convention, about 21,000 more passes were sold to NYCC 2014.

Anyone who’s attended New York Comic Con since its inception has probably noticed the increase in crowd size over the last few years. The con is bigger, the show floor is packed, and it’s become ever harder to attend panels or move from booth to booth. Well, it’s not just your imagination: as of this year, NYCC is officially bigger than the juggernaut that is San Diego Comic-Con.

NYCC organizer ReedPOP confirmed that it sold 151,000 passes to the New York City event this year, putting it ahead of SDCC’s 130,000. To be fair, that’s the capacity of San Diego’s convention center; considering the scramble to buy passes every year, SDCC likely could have continued to grow if it hadn’t maxed out its venue’s space. It’s not clear what NYC’s Jacob K. Javits Center’s capacity is, but it appears to be larger than that of the San Diego Convention Center.

San Diego Comic-Con International has been around since 1970, and has exploded into a massive annual geek and pop culture event. New York Comic Con, on the other hand, started only eight years ago in 2006, so it’s showing impressive growth. Like San Diego, NYCC has evolved beyond just comics, offering exhibits and panels about video games, movies, and other things pertinent to geek culture.