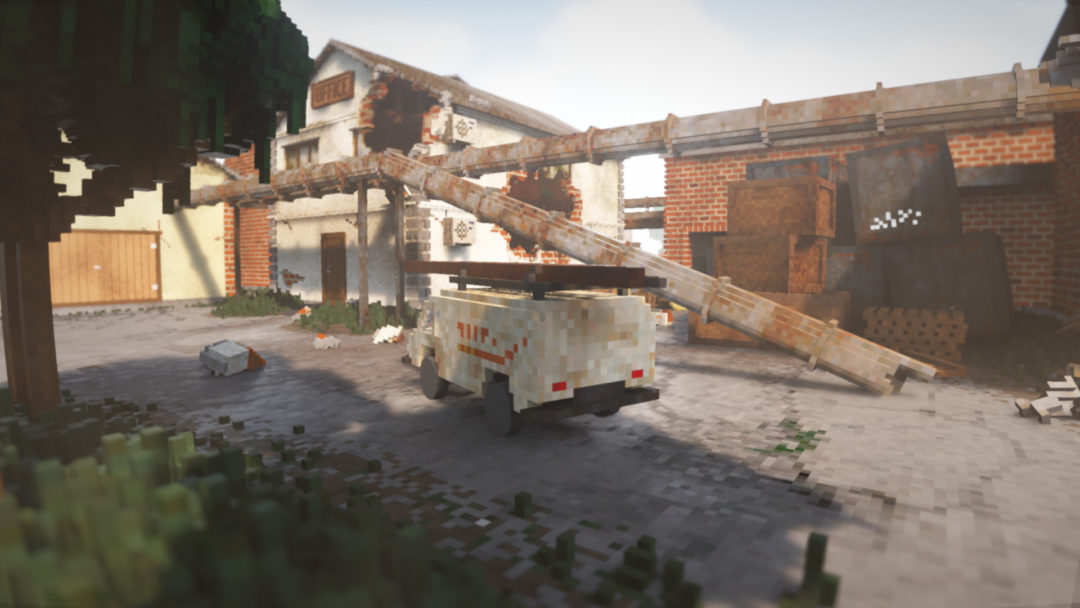 In 2004, two very different first-person shooters differentiated themselves from the crowd with their boundary-pushing technology. Doom 3, released in August, didn’t quite fit the Doom lineage, but it made for a dynamite tech demo of Id’s advanced new lighting engine. Then in November, Half-Life 2 reshaped the games industry in its own image, partially on the strength of its unprecedented physics simulations.

Since a decade and a half ago, game engines haven’t exactly stagnated, but AAA games have rarely made those kinds of sudden, massive, era-defining advances either. For those, we increasingly need to look to the indie scene.

Dennis Gustafsson is a programmer and game developer based near Malmö, Sweden. He’s been programming games since he was 12. When he was 23 he co-founded Meqon and began work on a middleware physics engine that would go on to be acquired by AGEIA Technologies and integrated into PhysX SDK.

In 2010, Gustafsson teamed up with artist and level designer Henrik Johansson to form Mediocre Games. Their first project was Sprinkle, a vehicle for Gustafsson’s experiments with fluid simulation. The title was a runaway success, and Mediocre went on to develop seven more projects, all of them physics-driven, non-violent games that rejected the unethical business models that are rampant in the mobile gaming sphere.

Now, two years after sunsetting Mediocre, Gustafsson is getting back in the game design ring and is pushing physics engines and graphics rendering technology further than he ever has before.

Proper use of a rusty pipeline. pic.twitter.com/DP02L1o85p

“I’ve had this idea about using a voxel representation for destructive environments for quite some time, but it wasn’t until about a year and a half ago that I started tinkering with it,” said Gustafsson. “It turned out better than I expected, and I started working on different game prototypes using the tech.”

For those not in the know, a voxel is sort of like a 3D pixel. It’s a block on a three-dimensional grid, in the same way that a pixel is a square on a two-dimensional grid. Voxel rendering was a popular early 3D rendering technique, employed in games like 1997’s Blade Runner, before polygon rendering became the industry standard. Today voxel rendering is largely used in medical imaging, but Gustafsson thinks the technique has untapped potential in the games sphere.

“I was doing this together with [Mediocre Games designer] Emil Bengtsson at the time, but we never really found suitable gameplay that we both liked, so we shelved the project early this year. After that I kept experimenting on my own.”

The world-destructing technology Gustafsson has been showing off on Twitter is pretty incredible, but he said that the biggest development challenge has been finding a suitable in-game justification for wreaking such havoc. “I personally really dislike shooters, so that was never an option, and I’m also not a big fan of violence in games in general. Coming up with fun gameplay that really benefits from explosions and massive destruction, but one that does not include killing or violence, turned out to be much harder than I thought.

“A puzzle game may sound like the natural choice, but traditional puzzles don’t work well with environmental destruction because the player has too much freedom and/or might break things that are needed in order to solve the puzzle. Another important consideration has also been that I really wanted the physics and destruction to be central to the gameplay and not just an effect.”

Gustafsson said the solution he eventually came up with satisfied all his concerns. He described the still-unannounced project as being “mostly about creative problem-solving” with some action elements. “I guess you could compare it to Portal in terms of gameplay, but with less puzzles, and much more (an almost ridiculous amount of) player freedom.”

What happens when you combine the fluid dynamics from Sprinkle with stochastic transparency? This! pic.twitter.com/cb8bz9P1rc

Player freedom is uncharted territory for Gustafsson, but physics-driven problem-solving is not. Mediocre Games was already pushing comparably modest mobile platforms to their limits with the dynamic fluid simulation of Sprinkle and its sequels. The studio followed the first two Sprinkle titles with Granny Smith, a Canabalt-style auto-runner that sent a runaway grandma crashing through all sorts of realistically shattering and crumbling surfaces. And the company’s biggest success, the appropriately titled Smash Hit, was all about the tactile catharsis of rhythmically smashing stuff.

In fact, Gustafsson described the indie sphere as being where all the most creative work in game physics is being done right now. He singled out driving simulation titles Rigs of Rods and Spintires as examples of games with compelling physics systems that meaningfully improve the play experience. And while he’s eschewed violence in his own games, he admitted that turn-based fighting game Toribash and beat-’em-up party game Gang Beasts have implemented physics in compelling ways too.

Indie games are where Gustafsson sees the most interesting advances in graphics and lighting technology too, another one of his passions. In this space he pointed to Playdead’s Inside as a standout example for its tasteful blending of engine-driven and artist-authored lighting effects.

Gustafsson’s own work in this area focuses on ray tracing, a technique that renders images by simulating how light interacts with them. It’s a process that produces far more subtle and realistic images, but at a far higher computational cost.

“I’m absolutely certain ray tracing will be the dominant rendering method for games in the future. It is a technique that is much closer to how light behaves in the real world… It is also good news for physics, because ray tracing allows a much more dynamic environment. Ray tracing is still quite expensive but hardware is evolving fast. My voxel engine uses ray tracing exclusively.”

I'm trying out dithered (blue noise) transparency in the voxel raytracing pipeline. Works surprisingly well together with TAA and gives much nicer reflections. The only issue is that the denoiser understandably gets very confused from the dither patterns. pic.twitter.com/GHWvkCjJ8J

Physical limitations still exist in both expected and unexpected places

There are still a lot of barriers to overcome in the world of physics simulation that pure indie pluck can’t yet solve. Because things like cloth, hair, and liquids are so computationally demanding, the limits on advancements in those fields are technological, not creative. Modern rigs are simply not yet powerful enough to render flexible, deforming surfaces in real time. So we’re still a ways out from a game where a character can put clothing on and off or actually sleep under covers naturally.

As for the future of physics engines, Gustafsson described networked multiplayer physics as the final frontier.

“Networked physics can be done in two ways — either you send the state of all objects to all clients all the time, or you just send the inputs and make sure all clients behave exactly the same. The first method takes a lot of bandwidth and will cause glitches when two players interact with the same object. The second one introduces an unacceptable lag, which can be hidden by predicting the world state and [making] corrections later on, but that is too slow with lots of physics, so none of them really work on a large scale.”

There is light on the horizon though, he said. “When or if we move over to cloud streaming that will partially solve these issues, because all clients run on some central server farm with really fast internal connections, but cloud streaming might introduce other issues. I guess we’ll find out soon.”

Multiplayer physics may be the holy grail of game physics engines, but Gustafsson himself is in no hurry to tackle it. His own project will be a single-player affair, for starters. But more than that, Gustafsson pointed to the soaring popularity of online multiplayer as one of the reasons mainline studios haven’t made any Half-Life 2-tier physics advances recently.

“A lot of people, myself included, enjoy playing with physics, but in some ways physics in games even had to take a step back over the last decade in favor of online multiplayer. Nowadays people expect to play with their friends online and I think that makes a lot of developers steer away from physics-driven gameplay. Half-Life 2 is still one of the best implementations of physics in games and that released fifteen years ago, so I don’t think it’s only about technology.”

Gustafsson expects to reveal his new project in about a month, and open it up to early access in six months or so. If you want something done right, you’ve got to do it yourself.

An earlier version of this post suggested Gustafsson’s next project would go into early access in a month. We’ve updated it to be more accurate.

Are These the MCU’s New Infinity Stones? – The Big Picture