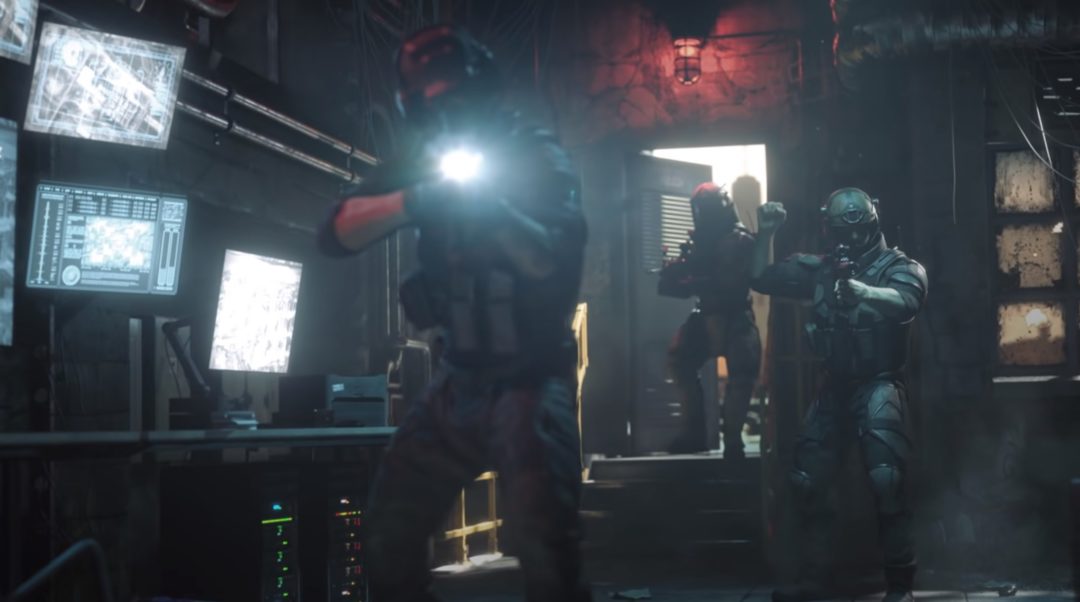 Redhill Games, a new game development studio based out of Helsinki, Finland took to the main stage at The Game Awards this past December to reveal the name of their studio’s debut title, Nine to Five. Tactical shooters have been making a comeback as of late, led by the success of Ubisoft’s immensely popular Rainbow Six Siege. Nine to Five hopes to stand out by really emphasizing the value of team ingenuity.

The debut trailer for the game doesn’t reveal a whole lot, but the developers have indicated that one of its key selling points is offering three teams of three in fast-paced rounds of varying objectives to keep things fresh and matches short.

I recently spoke with Matias Myllyrinne, CEO of Redhill Games, to learn more about what his studio is building with Nine to Five. They shared details about how they’re envisioning the game to play out, and it turns out they’re incorporating some interesting mechanics that will likely always have players looking over their shoulders.

The Escapist: Tell me about Redhill Games. Who’s on the development team, and what kind of experience does the studio have in making tactical shooters?

Matias Myllyrinne: We have a seasoned team. I’ve had the joy of working in games since 1999, and on that journey, I’ve had the privilege of working with great talent and wonderful people. We’ve asked many of the best we have worked with from various disciplines to join me again on a new adventure, and we came together from 12 countries.

Our EP Milos (Jerabek) ran the development on World of Tanks at Wargaming, Kirill (Potapov) was (its) Lead Game Designer, and Olga (Sulimenko) was (its) Lead on UX. Our COO was (Wargaming’s) Chief of Staff and Head of HR for global development. Our Lead Environment Artist, Art Director, Lead Weapons, and CTO worked with me at Remedy. We worked with our Lead Programmer Otto (Kivling) in the past too, and he was at Guerrilla Games. Our Senior Audio Designer worked at Rockstar and so on. There’s a team of great people, too many to call out here. These folks on the team have shipped a bunch of notable games, once again too many to mention, but I believe our best work is ahead of us.

Their skills are unquestionable and their work speaks for itself, but what I’ve come to appreciate even more is their character and camaraderie. With the right team around you, work is meaningful, and you learn every day from those around you.

We are aiming high but are approaching this opportunity at Redhill with humility and determination. We can draw strength from the fact that we have gone to battle together before. We know each other well, complement each other, and make each one of us better.

With this well-rounded leadership team, we can build not only games that will have a global impact but also an organization that is sustainable, long-lasting, and good. Something concrete we can be proud of.

What’s the premise of Nine to Five? It’s a tactical multiplayer shooter, but is there an overarching plot to the gameplay?

Myllyrinne: Nine to Five is not a story-driven game, but there are story elements and a world and context. In the near future, the last government has collapsed. On the streets, armed corporations battle each other for influence and control. These conflicts are so routine that being a mercenary has become just another job. The work is risky, brutal, and relentless. But for those smart enough to do it and live, running “assignments” for these corporations is a way to climb your way out of the gutter and make something of yourself.

Tactical shooters have really been making a comeback the past few years with games like Rainbow Six Siege, and in-development titles like Ready or Not, Ground Branch, and Due Process. What’s Nine to Five doing that will be unique in this blossoming space?

Myllyrinne: There are some great shooters out there that we love, but we feel there is room for fresh ideas and innovation. Nine to Five is built on the core idea that smart teamwork always triumphs over brute force and reflexes. We wanted a fresh new take on a genre that has gotten a bit chaotic in the recent years. Nine to Five is a tactical FPS where outsmarting the enemy is the only way to win.

We have the Power of Three gameplay (3 vs. 3 vs. 3 over 3 rounds) and changing objectives, which create shifting dynamics that prevent repetition and keep you on your toes. Your actions and decisions have consequences during and even after each round.

We also realize people don’t have infinite time, so this shooter experience is tailored for the goals and schedules of busy people, which means you can complete a match in just 15 minutes.

Are you going for realism with Nine to Five or more of that happy medium of arcade / realism like Rainbow Six Siege?

Myllyrinne: It is not a military simulator, but we’ve put a lot of effort into making the guns feel fun and responsive. On the realism scale, we are probably closer to Rainbow Six Siege than, say, Arma 3.

So the premise of Nine to Five is tactical three-teams-of-three matches that can be played quickly across multiple rounds with varying objects. Can you tell me a bit about what a match might be like or the objectives that you’ll be having players compete for?

Myllyrinne: We’ll mix things up and have various objectives in each map. One flow I like is based on gathering intelligence and escaping. The first round starts with each team trying to gather three pieces of intel. The winner of this round is then pitted against the two other teams.

Quite often the two teams work together to take down the leading team. Equally often they betray each other, and it leads to fun Game of Thrones types of moments… In the last round, one team will try to escape while the other two teams try to prevent this. It may sound complicated, but it’s actually intuitive and fun. We’ve had playtesters in Finland, UK, and Canada so far, and they’ve had a lot of fun together and found the tactical choices in these scenarios to be rewarding.

Why did you go with matches being 3 on 3? Will there be modes with larger player counts, or is that by design to keep matches quick?

Myllyrinne: This is our current focus and we are building on this formula. Coordinating and working together with two other players feels intuitive and allows you to still have different kinds of roles on the team. Originally we had questions on how well it could work, and that’s why we have extensively playtested it.

The feedback has been positive, and people who have tested the game really love it. It creates a very interesting human effect in the matches that changes the traditional dynamics of the team vs. team setting, making room for more tactical thinking and teamplay, but still keeping it easy to understand.

As far as gameplay mechanics go, “tactical” shooter can mean a lot of things. Will there be planning stages, destructible cover, leaning mechanics, etc.? What makes Nine to Five a tactical shooter?

Myllyrinne: Planning and coordinating are a core part of winning. Knowing where the enemy is and choosing when to engage is very key. Just running and gunning will get you killed quickly. The teams will have loads of gadgets, drones, traps, and plenty of weapons to tweak and tune to their liking.

Leaning mechanics and stuff like that are kind of the norm, and we’ll give players what they expect. We’ll have some destruction but won’t go too deep into destructible covers as we have a few new mechanics at play already, so we want to keep the game as accessible as possible while also providing tactical depth.

What’s the scope of Nine to Five, if you can answer that? Is this planned to be a games-as-a-service title? Any plans for single player content, bots, etc.?

Myllyrinne: The great thing about running a live game is you can react to the wishes of the players.

Boxed games is kind of like a monologue where you are giving a curated experience, whereas games as a service is a dialog between the dev team and the gamers. In boxed products you build something for years and hope people like it. Then maybe provide some DLC down the line.

However, with games as a service, you create something, people tell you quickly what they like or dislike, and you can tweak your roadmap and focus based on this. Multiplayer and playing with friends are our top focus, so we don’t have single players stuff cooking now.

Considering your alpha is next year, I’m guessing it’s safe to assume your targeting next-generation hardware with Nine to Five?

Myllyrinne: We are now building this for PC, but we will look at other platforms down the line.

Anything else you’d like to let us know about Nine to Five before we conclude?

Myllyrinne: Players can sign up for a chance at the alpha by visiting www.ninetofive.game. We hope you’ll join us for the ride in 2020.