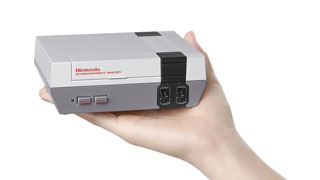 If you always wanted to play games on a classic NES, you’ll get your chance this fall.

Every year at Christmas a gamer somewhere gets a knock-off console from their grandmother. She knows you like “the video games,” and so she brings you some console with a few pre-installed knock-off games. But this year, your grandma could bring you an actual NES, because Nintendo is releasing the NES Classic Edition in November.

This mini-replica of the original NES will almost fit into the palm of your hand. It attaches to your TV by way of an HDMI cable, and it will come pre-loaded with 30 classic titles. Priced at $59.99, it includes a classic controller that will be instantly familiar to those who played the original console. Nintendo has confirmed that the console will support two-player play, and a second controller can be purchased for $9.99. If you happen to have a Classic Controller or Classic Controller Pro, those will work as well.

Nintendo of America president Reggie Fils-Aime said of the console, “We wanted to give fans of all ages the opportunity to revisit Nintendo’s original system and rediscover why they fell in love with Nintendo in the first place. The Nintendo Entertainment System: NES Classic Edition is ideal for anyone who remembers playing the NES, or who wants to pass on those nostalgic memories to the next generation of gamers.”

There won’t be any sort of online connectivity for the console, but it will include a pretty impressive list of classic games (see below). Unfortunately, you won’t be able to play any of your classic cartridges in this system.

The NES Classic Edition will land in stores November 11, and will be priced at $59.99. It look like it will be a great way to check out the games many of us grew up with.