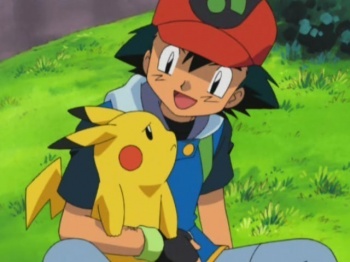 Trainers in the US can download the quintessential Pokémon, who’s designed to be as close to his onscreen counterpart as possible.

There are hundreds of Pokémon, but the most famous is still Ash’s Pikachu, thanks to his prominent placement in cartoons, movies and on countless pieces of merchandise. As part of its efforts to promote the new Pokémon Black & White cartoon show, Nintendo is giving people the chance to add this Pokémon celebrity to their team.

Until the 13th of February, Pokémon players in the United States and Puerto Rico can head to Toys “R” Us with their DS and their copy of Diamond, Pearl, Platinum, SoulSilver or HeartGold and download a Pikachu of their very own. This Pikachu is designed to be just like the one on the show, and knows moves like Iron Tail and Thunderbolt. He also carries a Light Ball item, which doubles his Attack and Special Attack stats.

In order to nab Pikachu, players will need to have unlocked the Pokédex in whichever game they want to download him to, and have less than two Wonder cards. Players can download Pikachu multiple times, but only once per game. A full, step-by-step guide to getting your own Pikachu can be found on the official Pokémon website.

I must admit that as downloadable Pokémon go, this one doesn’t seem all that great. As popular and/or famous as Pikachu might be, he’s not especially rare or unique. It would take a little bit of effort to match the exact move set that the downloadable Pikachu has, but it’s far from impossible. Still, it’s a level 50 Pokémon that gains XP faster than normal, and that’s hard to turn down, even if it isn’t unique.

343 Industries Wants to Inject New Mysteries and Questions into Halo