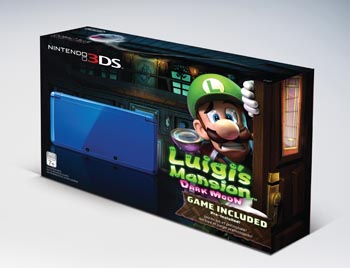 Alas, the 3DS is not green. This is a travesty in the Year of Luigi.

In a series of post-Thanksgiving deals, Nintendo has announced the first Luigi 3DS for North America. There’s only one thing missing – the color green!

The Year of Luigi will wrap up in about a month, and to end it Nintendo has bundled Luigi’s Mansion: Dark Moon, which released in March, with a cobalt blue 3DS for $170. The color was first introduced in the limited edition Fire Emblem: Awakening 3DS bundle. Whereas the Fire Emblem 3DS has a design featuring the main character’s sword and two dragons, the Luigi 3DS is just cobalt blue with nothing fancy on it. What a shame in the Year of Luigi. The bundle will be available starting Nov. 28.

Otherwise, Nintendo Land for Wii U, released in North America Nov. 18, comes with a Luigi-themed Wii Remote Plus controller – and this one’s green! This bundle is available starting Dec. for $60.

The Nintendo eShop has been running character-themed sales for a little while now, and it’s going to continue over Thanksgiving. Right now classic Mega Man titles are on sale for the 3DS and Wii U. Starting 9 a.m. EST on Nov. 28, Mario will be the star for a week. Link kicked off the character-themed sale, and Donkey Kong will wrap it up from Dec. 5 to Dec. 12.

Even though Luigi can’t get his own week, he’s got his own year. Sadly, it’s coming to a close – and without a special green 3DS.

Xbox One Skype and Streaming Apps May Ban Users for Swearing