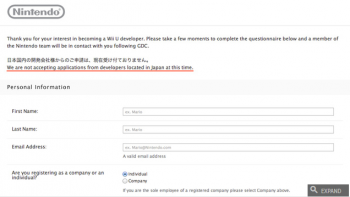 The licensing department is to blame, apparently. No, I don’t get it either.

“We are not accepting applications from developers located in Japan at this time,” says Nintendo to anyone interested in developing for the Wii U. This comes courtesy of a survey form sent out by Nintendo during GDC, a form which has attracted a great deal of interest – and not a little condemnation – in Japan. “Seeing ‘No Japs’ written on an international-looking website is such a terrible sight that it makes me weep,” Tweets a Japanese developer from studio Rice Cake, and while there’s a little hyperbole in that Tweet, it’s not entirely inaccurate. But it’s odd, very odd, coming from Nintendo right now, given that Nintendo’s supposedly looking to outside developers to boost the Wii U.

It’s not entirely clear why this should be so. According to an official statement sent by Nintendo to Eurogamer, the problem lies with Nintendo’s licensing department. “The licensing department of Nintendo Co., Ltd is currently not accepting subject applications from individuals in Japan,” the statement says, but that doesn’t really explain anything. It doesn’t say, for instance, whether the problem is a legal one – maybe there’s some quirk that needs to be ironed out before indies can be welcomed into the Nintendo fold – or a policy issue, or something else. Is this temporary, or something more serious?

Until we know more, the only question worth asking – as Japanese independent developer Toshirou Takahashi has it – is “why, Nintendo, is ‘only Japan’ excluded from individual registration?”

British Revive Knightmare TV Adventure Show For One Week Only

The Bureau‘s Agent Cole Has Made His Choice