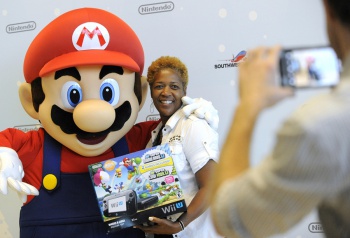 When I get on a plane, I don’t hope for much more than a window seat and some pretzels that aren’t stale. So I can’t imagine how surprised the passengers of Southwest Airlines flight 1883 were when they boarded their plane and were greeted by Mario himself, handing out Wii U consoles like candy on Halloween. Over a hundred passengers received complimentary systems, and that’s only the beginning of Nintendo’s new partnership with Southwest Airlines.

The partnership, which runs through the holiday season, will surprise thousands more travelers on random Southwest flights with free consoles. Nintendo will also be setting up Wii U Gaming Lounges in select airports, where travelers can spend time playing the newest Nintendo games while waiting for their flights. Keep an eye out if you’re flying through Dallas Love Field, Chicago (Midway), Denver, Atlanta, Tampa Bay, or St. Louis airports from now until December 22.

Nintendo and Southwest may not seem like the most logical of partners, but I doubt the lucky passengers getting free stuff will be complaining. “As Southwest’s video game partner, our aim is to bring smiles to travelers and Southwest employees through the fun of Nintendo video games,” says Nintendo’s Scott Moffitt. And from the look of the first batch of holiday surprises, it seems that the partnership is already off to a great start on that goal.