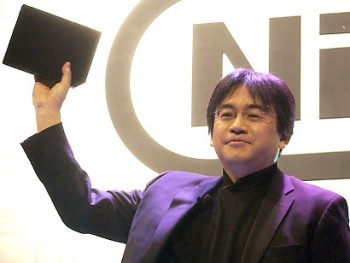 Nintendo head honcho Satoru Iwata feels the same way about Apple’s much-heralded iPad as he does the prospect of 3D gaming: “Meh.”

It looks like Adobe isn’t the only tech company not ready to jump on board Apple’s iPad train. Speaking with the New York Times, Nintendo chieftain Satoru Iwata said that he was frankly underwhelmed by Apple’s new device. “There were no surprises for me,” said Iwata, “It was a bigger iPod Touch.”

It’s intriguing to hear these statements coming from a Nintendo representative, given that the company has effectively been the videogame industry’s equivalent of Apple as of late, preferring form and accessibility of use to raw power and customization – and profiting immensely because of it. Hell, just look at the Wii and tell me its “sleek white plastic” appearance doesn’t seem like something that Steve Jobs could have first presented to the world (though thankfully, we dodged a bullet on the name iWii).

Do you know what else Iwata isn’t thrilled about? 3D gaming, currently spearheaded by Sony (though not so much on Microsoft’s end). While Iwata was positive on the idea of 3D movies like James Cameron’s ridiculously successful Avatar, he questioned bringing the experience home. “I have doubts whether people will be wearing glasses to play games at home. How is that going to look to other people?”

I’d be tempted to say that Iwata really shouldn’t be worrying about that sort of thing given that he makes the “stand up and flail around” console, but that isn’t his only hangup, either. Before Nintendo is ready to move into the realm of 3D gaming, says Iwata, it will have to study the possible health effects of long-term exposure to 3D graphics. After all, pointed out the executive, people spend much longer in front of their games than they do a two-hour movie (or hell, even Avatar).

Iwata also took the opportunity to deny rumors that his company was working on a motion-sensitive DS successor or a high-definition Wii. While he admitted that Nintendo’s engineers were working on new, top-secret machines, he wasn’t sure whether or not those features were things that consumers actually wanted: “I question whether those features would be enough to get people to buy new machines.”

Considering that people bought every iteration of the Game Boy ever made, from original to Pocket to Color to Advanced to Advanced SP? I think that they just might be. But hey, this is why he’s the head of a multibillion-dollar corporation and I’m not.

Advice From a Fanboy