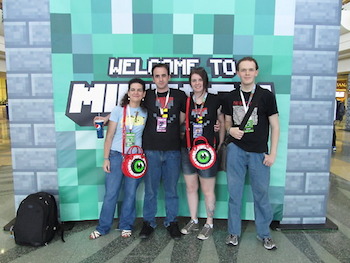 The Minecraft fan convention won’t be happening anytime soon, but Mojang has big plans in mind for when it does.

Mojang has announced that Minecon will not be held this year. In an update published on their official website, chief operating officer Vu Bui wrote that while the convention would not happen this year, next year might prove optimum to hold the event.

“I’ve been getting a lot of questions about MINECON lately, because before this time last year everyone knew the date and location and ticket info for MINECON 2013,” said Bui. “While we don’t have a set date for the next MINECON just yet, I wanted to let everyone know that it won’t be until some time in 2015. I’m shooting to have it in the spring in London!”

“As soon as I have confirmed information it’ll be out there. We always announce as soon as we confirm with the venue and have a signed contract, but never before, because we want to make sure we can follow through with the event and we never want people to start planning to attend something that might not happen. So watch out for information in the coming months!” he writes.

Minecon was first held in Las Vegas back in 2010 and moved to Paris in 2012. Last year the event was held in Orlando, Florida, and has grown in attendance from 50 people to more than 7,500 since its inception.

“While we’d love to do MINECON every year and it’s the only event we do as a company, we want to make sure we can give it the attention it needs, and that means that springtime next year will work best!” said Bui.

Burger King Offering Android Smartphone with a Side of Fries

Asmodee Buys Days of Wonder in Board Game Publisher Power-Merger