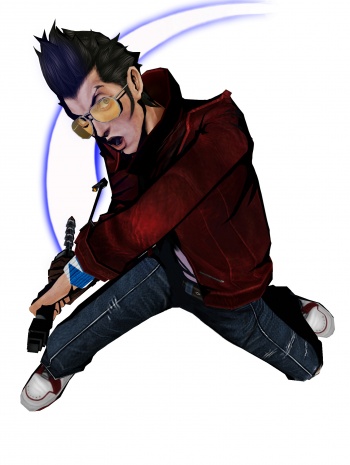 Back in July, Goichi Suda – better known as Suda51 – “>told Edge during a preview of No More Heroes 2: Desperate Struggle that he was looking to move beyond Nintendo’s Wii for future games in the series. Despite the Wii being far and away the most popular console this generation, hardware limitations (and an unusual install base) make it difficult for more “hardcore” third-party games to do well.

“I really want to make NMH a big franchise, and with this second episode have bigger success. I’m putting a lot of care into developing this IP, as I feel there’s a lot of potential,” he said. To expand the franchise, though, Suda added that he didn’t think the games could stay on the Wii: “I think this is the last NMH that is going to be developed on Wii … To expand NMH to new possibilities, we need a new platform. Wii is a great platform, but we’ve done everything we can with it now.”

Does this mean that Suda and Grasshopper Manufacture will be jumping ship to take advantage of other motion control technology such as Project Natal or Sony’s ball-on-a-stick wand? Not necessarily – Suda clarified his remarks to 1UP:

Actually, I answered differently, and it may have been misinterpreted. What I wanted to say was, looking at the Wii, I think No More Heroes 2 will probably be the last iteration for this current platform. But there’s probably going to be a “Wii 2” or other next-gen system from Nintendo at some point, so I was saying that I would want to do another game in the series on the next Nintendo platform.

I want to continue the No More Heroes series, but I’ve finished the story for [NMH protagonist] Travis. It’s completely finished in No More Heroes 2. So I want to think of a different story — a different character, or something like that within the series — starting on the next Nintendo platform.

So there you have it. Suda51 wants to do a game on the Wii 2, but it won’t star Travis Touchdown. When jokingly asked if it would be a “No More Heroes Solid” situation, though, he laughed in denial – Hideo Kojima would get mad at him.