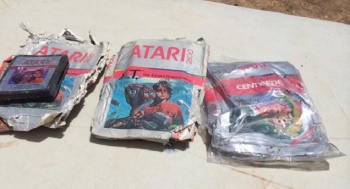 Copies of E.T. The Extra Terrestrial and other Atari games cartridges recovered from a New Mexico landfill will be auctioned this fall, just in time for Christmas.

A landfill in Alamogordo, New Mexico was excavated earlier this year, confirming the urban legend that Atari had dumped unwanted copies of games there in the 1980s. The Alamogordo City Council voted unanimously on Tuesday, September 9 to auction off 800 of the 1,300 cartridges recovered from the landfill. The games will be auctioned through eBay and the City Council’s website.

Joe Lewandowski, who supervised the dig site, told Reuters that the sale is expected to begin in two weeks, and should be complete before Christmas. Some of the remaining 500 cartridges will be kept by the city, and the rest will be donated to museums. “We’ve already heard from the Museum of Rome, which has a section for video games,” says Lewandowski. The cartridges are currently stored at the New Mexico Museum of Space History in Alamogordo, by the Tularosa Basin Historical Society.

E.T. The Extra Terrestrial for the Atari 2600 was rushed to market to coincide with the release of the film. The game is widely considered to be the worst video game ever released, contributing to the video game crash of 1983. Atari produced many more copies of the game than were ever sold, and disposed of some of the cartridges in the Alamogordo landfill. Copies of Centipede, Space Invader, Asteroids, and other Atari classics were also unearthed in the dig, which was sponsored by Xbox Entertainment Studio. A documentary of the excavation, Atari: Game Over, is slated to air this fall on Xbox platforms, as part of a six part documentary series.

9 Movies from This Fall’s Film Festivals to Watch For