By now you’re probably aware that Star Wars Kinect features a dancing minigame which depicts Han Solo, Lando Calrissian and various Empires Strikes Back background players busting a move to a parody of Jason Derulo’s “Riding Solo” on the Carbonite Freezing Chamber set; and that this is the most recent thing that The Internet has decided is an atrocity more worthy of its ire than the massacre of civilians in Syria, the vigilante murder of an unarmed teenager in Florida or the development of the Hot Dog Pizza.

It’s not hard to see why it so offends the people it offends which, at least tangentially, includes myself. Reducing what’s probably the second most defining dramatic moment of the entire saga into lame dance-pop larf is as close as these things get to sacrilege. It’s cultural graffiti, an affront to the dignity of one of the defining works of popular art of the 20th Century. A work of fiction so important to so many that some have taken it as an article of (literal) religious faith.

Oh, c’mon. It is. The solo/Solo word-association swap is exactly the sort of thing that nerd icon Weird Al Yankovich built a media empire out of. The fact that the Carbonite set really does look an awful lot like a cheesy dance club at the right angles, complete with Disco/Motown-era icon Billy Dee Williams as Lando, is kind of clever. Let’s be honest with ourselves: If Weird Al had recorded “I’m Han Solo,” or if this was a cutaway gag on Family Guy, or a skit acted out with Lego figures on Robot Chicken, or a short-subject animated with sprites from the SNES Empire game on College Humor/Machinima/Dorkly, or any of the hundreds of other places where stuff like this is okay, we’d laugh at this, Facebook-like it, Tweet it to our pals and then go back to our day until such time as the next “AT-AT Does Something An AT-AT Would Not Typically Be Expected To Do” video hits Youtube.

But, for some reason, this is an “official” Star Wars thing, coming from Lucasfilm, and so it offends us. Because it reminds of the indignities we willingly forked over money to endure with The Prequels and the Special Editions. Also, I think, because imagining that there’s some kind of imaginary rule in place that Lucas and his companies are required to be the last place where Star Wars is still holy writ allows my generation of thirtysomething geeks to avoid the inescapable fact that the lumbering Post-Post-Irony Ouroboros of endlessly self-referential contemporary pop-culture is a monster of our making. 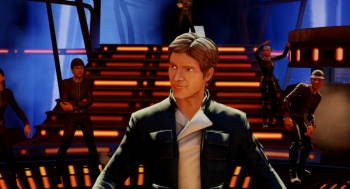 We were, after all, the generation that agreed via our (parents’) wallets that anything not only could be, but ought to be, a line of action figures, or that a whole universe of genre fiction originally willed into being to sell such action figures deserved to be afforded Shakespearian cultural import. Then as adults, we agreed with our own wallets that turning things that had no business being mass-marketed kitsch merchandise into mass-marketed kitsch merchandise wasn’t just a funny one-off joke but something that should happen to everything. We first embraced, then manhandled, the concept of ironic appreciation as a fix-all for justifying our own protracted childhoods (“Yeah, I’m wearing a He-Man shirt, but ironically so it’s okay!”) and then applied it to everything else under the sun for good measure. We are the generation of Darth Tater, the Don Vito Corleone Bobblehead. My father’s generation gave the world The Beatles, The Stones, Dylan, Woodstock, Laugh-In and The Muppets. My generation gave it Dorothy of Oz trussed-up in S&M gear being tormented by a goblin because … comedy?

All of which has its place and is often quite amusing (except that Wizard of Oz thing, that’s just messed up), and I’ve enjoyed more than a small amount of it myself. I’m just not sure that I or anyone else of a similar “geek culture” disposition really has any real standing to ask that some kind of amorphous line of demarcation be maintained between acceptable iconographic irony and debasement, particularly when the line keeps moving.

Han dancing in a Kinect game (and, incidentally, let’s not overlook the “Booooo! Motion-controlled casual games are the death of all gaming!” aspect of all this) is a transgression against the dignity of Star Wars because it’s an official Star Wars product, while Empire on Ice is okay because it’s a spoof made by fans/comedians? That distinction doesn’t really hold up when you consider that Lucasfilm actually collaborates and endorses efforts like that and Family Guy‘s trilogy of full-length parodies. Increasingly, it becomes clear that the distinctions are drawn not from any kind of rationale, but merely from the ever-changing geek consensus that the internet has allowed us to cultivate.

Mind you, I’m not suggesting that anyone not be irritated by the downgrading of an important moment from an important film into a goofy bit of flotsam but I can’t really be objectively outraged when that sort of downgrading is par for the course for the whole universe of popular culture. It’s a more than a little ironic (in the real sense) that the same Geek Culture that cries “Blasphemy!” at the desecration of Han Solo is ever at the ready to lay wreaths at the feet of South Park for going right up to the line of actual blasphemy in their various episodes poking fun at the absurdities of Christianity, Islam etc. An extreme example, perhaps, but the point stands. We don’t get to declare “nothing is sacred!” as the rallying cry of the modern consumer culture and then expect to issue exceptions when it starts happening to stuff we assumed would remain untouchable.

“I’m Han Solo” may indeed be an abomination, but if so it’s an abomination we brought on ourselves by birthing a pop-culture mentality that would rather keep things alive through ironic parody than ceding some space to something new that can thrive without comedic justification.

Just something to think about the next time you’re given to think that what you’re really missing in life is a t-shirt depicting Cindy Lou Who leaning out of a blue Police Call Box.*

*Original joke in this spot was “Horton the Elephant ogling a tiny Tardis” until a quick google search made my point for me by proving that this already exists. And yes, I’d probably get both shirts, too.

Valve Hiring For Help With Hardware