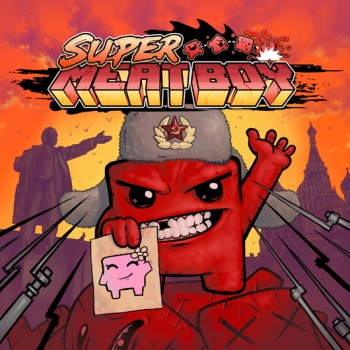 There’s no denying it: Meat Boy looks friggin’ sharp in an ushanka.

Last month, we brought word that Super Meat Boy creator Edmund McMillen was looking for help designing the box art for the game’s retail release in Russia. The winner would be a piece of art that successfully made Meat Boy look cool, and look Russian.

Well, the winner has been chosen! As you can see from the picture to the right here, artist MaadArtist’s Super Meat Boy box art easily fills the criteria.

You have Super Meat Boy looking grizzled and cool with that gap-toothed grin! He’s looking for Bandage Girl and wearing one of those awesome fuzzy ushanka hats! He’s in front of the Kremlin, and there’s good ol’ Lenin! (Correct me if I’m wrong, but that’s the Lenin statue in Volgograd, yes?)

I think that my favorite bit of the picture, though, is the pile of dead Meat Boys beneath the feet of the one still alive. It’s very reminiscent of the actual game, where completion of a level will show all of your runs overlaid on top of each other – so you watch Meat Boy after Meat Boy die painfully in a spray of blood until one finally makes it.

Congrats, MaadArtist. Not only do you get a new ACER monitor, but you get your work seen in game shops all across Russia. That’s pretty nifty in any book.