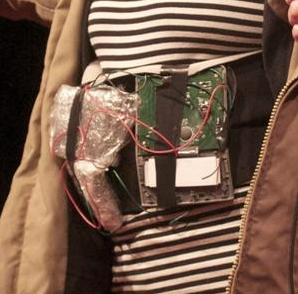 He didn’t think twice about it, but the bomb disposal unit certainly did.

“I didn’t think twice about it, because, literally, it’s two blocks of clay,” says playwright Ethan Fishbane, “a calculator that’s cut in half, and some wires from a Gameboy. It’s stupid stuff.” Unfortunately for Fishbane, when he threw his prop – a makeshift suicide bomb from his thesis project American Suicide Bomber Association – in the trash when he moved out of his Manhattan apartment, the building superintendent freaked. Cue bomb squad – with the Joint Terrorism Task Force and Arson Squad on standby – who plunged into every trash bag up and down Bedford Street seeking more infernal devices.

“They came to knock on my door,” says Fishbane, whose response, once he realized what they were talking about, was “‘Oh, my God! I think that’s my prop. I think that’s mine.” The play has been performed several times, in Indonesia and South Africa as well as New York City, without any problem. The plot has two people discussing the nature and practice of suicide bombing, only to be interrupted by a third – an audience plant – armed with a bomb. Written as a Tisch School of the Arts senior thesis project, earlier this year Fishbane was looking for $1,500 Kickstarter funding to take him to South Africa as part of a planned performance. The Kickstarter was successful.

“I felt the response was wholly appropriate,” says Fishbane. “Even if it’s just a prop for a theater piece, [the police] were on top of it.” This will probably be the last play he ever writes about suicide bombers, he told the New York Post.