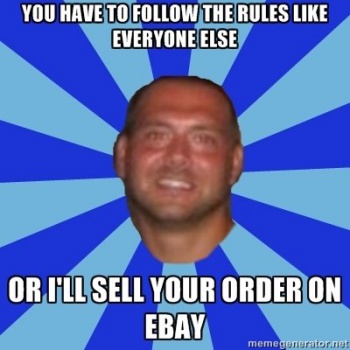 Now that he’s incurred the wrath of the entire internet and become a lesson in terrible PR tactics, Paul Christoforo has said he’s sorry. Sort of. (Not really)

Yesterday was not a good day for Paul Christoforo. After months of providing terrible customer service, things blew up in his face when a customer named Dave forwarded a recent series of abusive emails from Christoforos over to Mike Krahulik of Penny Arcade. Krahulik involved himself (after seeing Christoforos brag about involved with PAX East), but the one-man PR firm kept the venom flowing until he realized who Krahulik actually was. As a result, Krahulik posted the entire exchange on the Penny Arcade website, and the story went viral.

Christoforos was quickly fired from handling PR and customer relations for The Avenger – a controller accessory that was originally created for helping disabled gamers – but that was only the start of the bad day for the man. He became the subject of ridicule, video parodies, and even became the butt of a joke made by the insurance giant Geico. He’d achieved a status normally reserved for reality television stars: Reviled laughingstock.

Now, a day after he stirred the proverbial hornet’s nest (and been stung all over), Christoforo is trying to do some damage control. Speaking to Kotaku, the man admitted to being humbled by the swift retribution thrown his way and that he didn’t handle things as well as he should have, but insists that people are overreacting to the situation. Aside from receiving thousands of antagonistic emails, Christoforo has stated that Web users are also targeting his wife and child.

OK, on one hand: Going after the man’s wife and young son is definitely wrong. The fact that people are harassing his wife on Facebook and leaving voice messages containing death threats directed at both her and his two-month-old child is disgusting.

On the other hand? Christoforo clearly isn’t sorry. Reading through the entire account, he never actually apologizes for his actions. He’s just sorry he got caught:

“I didn’t know who that guy at Penny Arcade was,” he admitted. “If I had known, I would have treated the situation a little better.”

Translation: “I’m nice to people as long as they’re important.”

You can read through the whole story over at Kotaku. Here are a couple of jaw-dropping highlights, though: Christoforo was “just joking around” when he claimed to know people like Cliff Bleszinski and the mayor of Boston; he also accuses Mike Krahulik of being “unprofessional” in his emails (while saying nothing about his own incredibly disrespectful tone and determination to poop all over the English language).

If Christoforo is telling the truth and hasn’t lost any other clients after this mess, that’s incredibly disturbing. This is not a person you want representing your company, in any capacity.