There’s a gameplay mechanic that’s as old as the hills, that goes all the way back to the early 90s PC adventure gaming dominance, and which has remained unchanged for most of its existence, despite the fact that change is very much what it needs. I speak of nothing less than dialogue menus: The practice of letting players navigate conversations with NPCs by selecting from a list of pregenerated responses. And it bears about as much resemblance to real-life conversations as a Fuzzy Felt picture of a bemused dog does to an actual bemused dog.

I’m not saying games have to mimic reality at all times. If, say, Modern Warfare 2 adhered to reality, the player would spend eight months jerking off in a military training facility before getting their legs blown off by an IED and invalided straight back to their parents’ house. But I’m so sick of the dull, wooden backing-and-forthing that takes up a huge percentage of games like Dragon Age. You say something. They say something in reply. Rinse, repeat. It’s like watching a televised debate between puppets of Lord of the Rings characters.

At their worst, dialogue menus are used to put an interactive spin on an exposition dump, and I know this because that’s generally what I’ve used them for in my own adventure games. When the player needs to learn a big pile of information from an NPC, all they have to do is just go down the list of questions. They might as well just have all the dialogues play out one after the other and flash up a caption reading: “Why not make a cup of tea?”

The other thing dialogue menus provide is the sort of thing Dragon Age showcases; where you have a bunch of different responses to an NPCs comments, each reflecting a different attitude. But it doesn’t usually make any difference to the conversation except determine what their very next reply will be, and you get haunted by the knowledge that you’ll never know what they would have said if you’d tried a different track.

And NPCs are always ridiculously keen to ramble on to a complete stranger about topics they’ve brought up out of nowhere, like they’re being interviewed for a documentary vox pop. And when they run out of topics and you try to talk to them again, you’re often forced into a very bizarre exchange like this one:

PC: Excuse me, could I ask you something else?
NPC: Of course you can.
PC: That’s all I wanted to know.
NPC: Good luck with everything!

It does sound a little bit insane, doesn’t it? It’s like overhearing a conversation between two malfunctioning Stepford wives and it breaks immersion a little bit.

I really feel that an opportunity for some innovative gameplay is being missed here. After all, conversing with someone in real life is practically a game in itself. Dodging awkward questions, filling silences, hurling back quips and rebuttals like Cupid’s shurikens to impress and amaze your chatty chum. Conversation should flow like a river, not like a big clunky lever that clamps one character’s jaw shut while the other gives his prepared statement. So, since you’ll remember I’m also occasionally a games designer as well as a games assassin, here’s another in my occasional series of Gameplay Ideas That Will Never Be Used Because They’re Too Excellent. 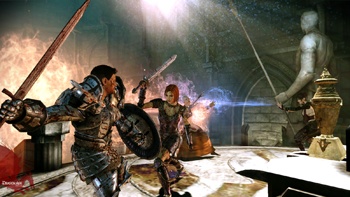 One of the recent Leisure Suit Larry games (seriously, is this where we’re looking for innovation now?) had a conversation minigame where you directed a little symbolic sperm down a path avoiding obstacles, and hitting an obstacle made Larry say something stupid. I want to take that in a more complex direction, preferably far away from that whole sperm thing.

So you’ve got the two characters who are having the conversation on screen, and down at the bottom of the screen you’ve got two circles, one for each analog stick. Each circle has its perimeter divided between various options, and you select the options by pushing towards the appropriate section with the appropriate stick.

With me so far? Okay. Conversation proceeds automatically, and while one character is talking, the other gives appropriate feedback – nods, “uh huhs,” “reallys,” that sort of thing. The left stick is used for choosing Topic. The right stick is for Attitude. Topic varies from character to character of course, but one of the options will always be Unimportant Small Talk. Attitude varies from topic to topic, and can be things like Bored, Glib, Creepily Enthusiastic, and there will always be the option to Want To Leave.

So the Attitude you’re portraying will change what kind of feedback and responses the player character gives, and they can try to change the subject when they discover new things they wish to learn about. The player character waits for the next appropriate point in the conversation before changing subject or attitude, generally between voice files.

NPCs have invisible stats that regulate their Fondness for the player and their Relaxation, which can go up or down, depending on the Attitudes the player character shows and whether the NPC appreciates them or not. Fondness changes what the NPC says – a NPC who likes you will talk about whatever you want to talk about, while a NPC who dislikes you will be less forthcoming, and may move the conversation to other subjects, such as how much of a douche you are. Relaxation changes how much detail the NPC will go into. In our current example, the Relaxed NPC will not be satisfied until they have explained exactly what brand and condition of douche you have most in common with.

And once PC and NPC alike have run out of things to talk about and respond to, they will have no choice but to fall back on Unimportant Small Talk, which will descend into increasingly long awkward silences until either character decisively breaks the discussion off. Best of all, keeping the various buttons free allows players to dip in and out of conversation while doing other things, like inspecting the NPCs DVD collection or climbing over the furniture, thus avoiding those stationary-wooden-puppet conversations I hate so much.

The drawback to this system is that it’s a difficult thing to script, but that’s just an organizational problem which could no doubt be easily solved with a big enough flowchart and a collection of generic dialogue lines to patch together the topic switches.

Obviously, I’d need to prototype this out a wee bit to see if there’s any mileage in it, or if it’ll turn into the same ridiculous bollocks the Oblivion persuasion system turned out to be, but I think with the right scripting it’d be a bit of fun. And since we’re on the subject of social interactions, I’d now like to discuss the innovative new sexual intercourse minigame idea I’ve come up with. Basically, you use the left analog stick to move your tongue around and the right analog stick to gyrate your hips – [remainder of article redacted in accordance with internet decency protocols].

Get Your Graffiti in Crackdown 2